Yesterday we officially kicked off our blog coverage of the upcoming 2016 LA Film Festival with the scorching-hot-off-the-presses announcement of our Opening Night film Lowriders, Guest Director Ryan Coogler and Spirit of Independence honoree Ava Duvernay—all taking place at our new home at ArcLight Cinemas. Click here if you missed any of the fun, or visit our press release page for more details.) But that’s not all…

If you sense an excited hum emanating out from our Pico Boulevard headquarters and spreading out across the Southland, it’s probably because we know that LA is about to get a whole lot more colorful, thanks to LA-based artist Carolyn Castaño.

So keep an eye out. The official poster art for the 2016 LA Film Festival is coming soon to a lamppost, billboard or bus shelter near you! 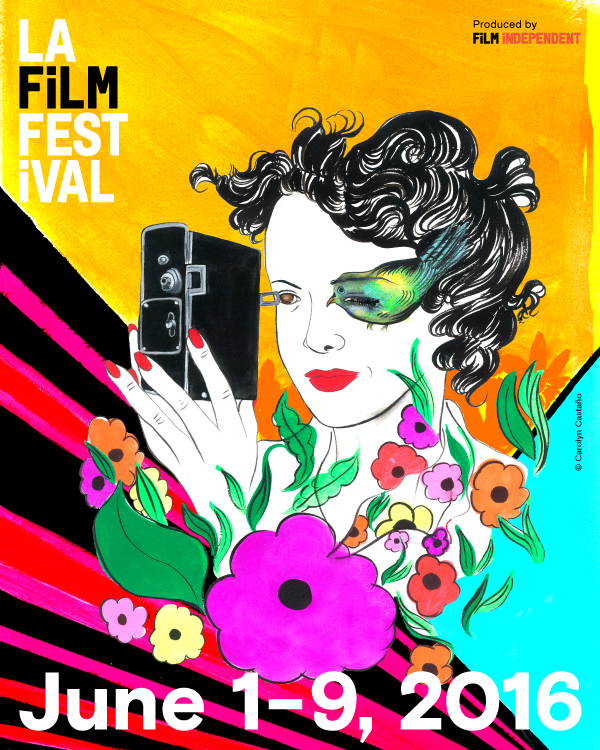 A native Angeleno, Castaño joins the ranks of acclaimed local artists who have lent their distinctive interpretation of Southern California iconography to the Festival’s visual identity in years past, including such illustrious names as Ed Ruscha and Noah Davis.

The daughter of Colombian émigrés, Castaño’s fine art and illustration work draws inspiration from a variety of sources, from the history of women in Latin American, to French impressionism, to botanical illustration and experimental filmmaking.

Film Independent recently visited Castaño at her home studio in LA’s dense, diverse Westlake neighborhood: a delightful cluttered creative space bursting at the seams with art supplies, reference books and projects in every stage of completion—all with a crackerjack view of the Hollywood Sign and plenty of bright SoCal sunshine.

Watch the video to see what Carolyn had to say about her work, her influences and the process of developing this year’s floral, feminine and downright amazing LA Film Festival poster:

So keep an eye trained on your favorite swath of outdoor ad space. Chances are there may soon be a mysterious woman with an odd bird-eye and an old movie camera staring back at you. And if she is, good things are just around the corner.

Pre-sale passes are now available for purchase to Film Independent Members. Pass sales will be open to the general public beginning Tuesday, April 12.

Individual tickets sales begin for Members on Thursday, May 5 and will be open to non-Members beginning Tuesday, May 10.

Meet the Future Filmmakers: Millennial Moviemakers Gear Up for...

These Were the 2020 Film Independent Spirit Awards: Best of the...