EDITOR’S NOTE: the below piece originally ran in January of this year. We’re re-posting it here with minor edits. Thanks to guest author Hamed Hokamzadeh.

It sometimes feels like there’s a divide between filmmakers and sound professionals. There are millions of decisions made from development to picture lock, and the sound team is rarely consulted on any of them–especially on indie films with limited resources. We’re living in a new golden age of indie cinema right now, and with so much exposure and attention there must be a way to incorporate the sound team into the key crew to build that trust, so that together we can elevate the aural experience of the film.

Below are some thoughts, observations and best practices Thomas (co-founder of MelodyGun) and I have figured out over the years that may be helpful to producers, directors and sound professionals.

BEYOND JUST WORKING TOGETHER

The best collaboration runs beyond the immediate project at hand. We regularly host film nights on the mix stage with clients. We catch up and talk about anything but the film we’re working on. It’s really helpful; you can shift the “working relationship” to a genuine bond over culture, music, whatever. We’re also obsessed with sound, of course, so during the pandemic last year we interviewed writer-director Shatara Michelle Ford about her Spirit Award nominated film Test Pattern. We discussed how certain scenes sounded in her head while writing, as opposed to in post when we started working with her. It was fascinating and also made us know each other more intimately.

All to say–build genuine relationships over shared experiences and challenging conversations beyond the mundane. Sound people are filmmakers, too. You’ll find you have a lot in common.

WOULD YOU SAY THIS TO A DP? 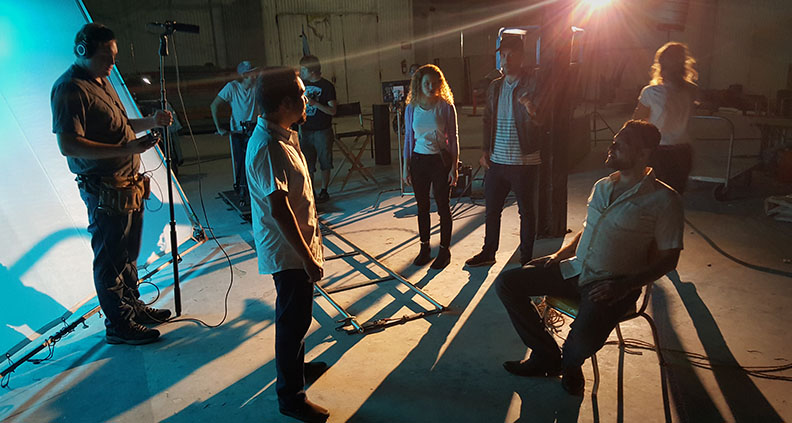 Most directors aren’t interested in discussing the technical aspects of sound. If this is you, picture how you talk to your DP. You trust him/her/them to pick the lens and shape the light for each scene because they know the film inside out, right? Make sure your sound mixer or sound designer knows the film that well too! Ask them for ideas or feedback on scripts or cuts. Then, when the time comes, you can trust your sound mixer to tell you what resources they need for the shoot, etc. When you start post sound, you won’t have to re-explain what the movie’s about for the millionth time. You’ll find yourself discussing the challenges you faced during production and how that changed a scene for better or worse, and what sound can do to bring it full circle. This also allows your post sound vendor to start talking with your producers, so that post schedules and budgets aren’t a surprise to anyone, but rather a discussion about what’s best for the film and what’s realistic.

This way, your sound department isn’t scrambling at the last minute. Instead they’ll feel part of the key crew, and that’s a huge deal! You now have upgraded the quality of your film and gained a trusted collaborator. 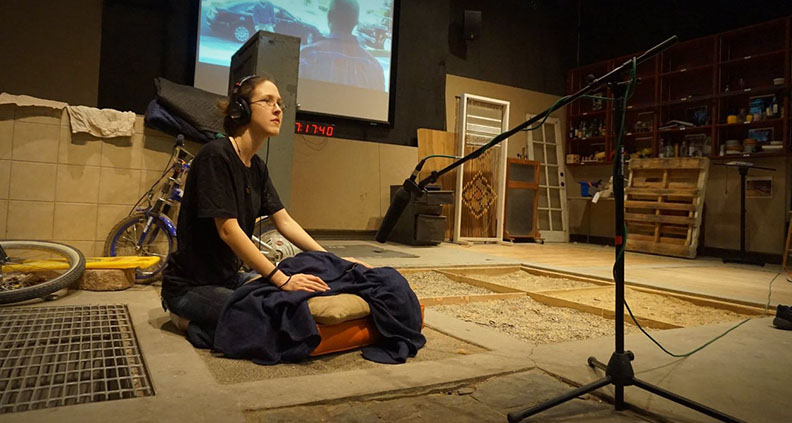 As legendary Hollywood sound editor Wylie Stateman preaches, your shoot will benefit from having a sound director or sound supervisor on board from pre-pro. If that’s not possible, another option is to ask the sound deptartment to highlight the script with any notes/questions/thoughts. What’s been most successful for us is discussing the script internally with our own team, then having a meeting with the director and producer. We might say “get wild lines of this,” “record foley of that rusty hinge at the barn,” as well as things like “costume might be a problem in getting clean lav,” or “this bag of chips should be made out of material that doesn’t make noise.”

There was a film we consulted on that mostly involved phone calls, where viewers never saw the person on the other line. Production wasn’t sure whether to record the phone call on set or in post. We suggested they record the real actor on set (in a different room) because it’s cheaper than coming to the studio in post, and that way you get real-time performance from the actors. Once in post, we can bring in the actor for pickups if needed.

Another advantage in talking to sound department in pre-pro is getting a sense of what a scene may feel like once it has ambiance, foley and an overall sonic tone. Sound designers have a unique ability to hear a scene a thousand different ways–and understand what each one communicates to the audience. With the right sound plant, you might be able to “show, not tell.” You might rethink the execution of a scene; maybe we don’t need the exposition, instead the tone alone will work in a way that’s more engaging for the audience. 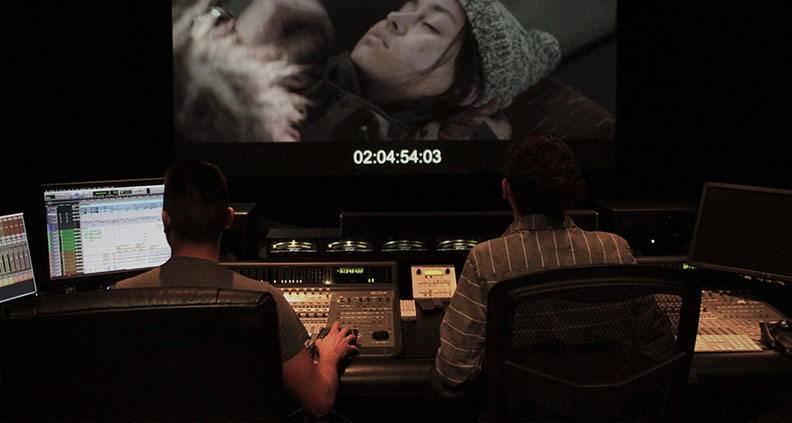 We’re constantly thinking about how the sound can make the flow of a film feel invisible and how to bring the audience into moments by using sound as a focusing mechanism to dictate perspective. By thinking about this earlier on, you can truly build a sequence to maximize its cinematic potential rather than relying on sound as more of a patchwork.

Director Denis Villeneuve once expressed a sentiment we echo all the time, which is the importance of making sure the sound has its own philosophy that speaks to the film. We can achieve this by cutting sounds before picture lock, or by simply reading scripts and having early conversations about the story.

For us, even if we won’t be immediately working on the film, it’s great to let the story and tone marinate in our heads. Who knows? Maybe we’ll be working on a different show and come across a sound and say, “This would be perfect for that scene in that feature coming up!” Slowly, the world presents itself to you. When you’re living with an upcoming project in your subconscious, by the time you get your hands on the cut you already have a head start in defining the tone of the world. And you trust your instincts.

Imagine a long, dark engine room where there will be a brawl—you might establish the different machinery more specifically as the character passes by each machine by keeping them in the foreground, introducing the specific sounds of the room, with perhaps one hero machine that is especially dangerous, harsh and chaotic sounding.

With that extra time at the beginning of the scene, with the character slowly passing by each machine, you have a palette that the audience understands and you can weave those elements into the scene as needed, using that hero machine as the genesis of tension where the fight will end up. Without planting that you just might not get the same payoff, with the audience being viscerally afraid and thinking, “Oh damn! I hope he can stay away from that dangerous machine!” Discussing this with your sound designer prior to filming could influence how you choose to shoot a certain scene or element.

KEYS TO THE CASTLE 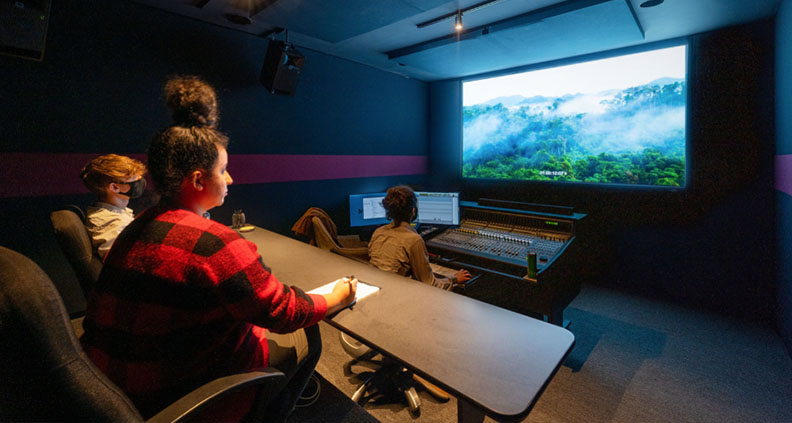 When you truly bring in a sound team to collaborate with you like any other key crew, you’re giving them the keys to the castle. Your story and characters brew in their head for months or years prior to doing any actual work. Each film becomes our own passion project, rather than another film on the schedule. For us, these stories become a part of our waking lives and thoughts and in an increasingly commoditized world where we’re pumping out more content than ever, you want that from your crew.

Hamed Hokamzadeh and Thomas Ouziel are Co-Founders of MelodyGun sound studios in Hollywood. To learn more, check out Hamed’s Member Lens interview with us from earlier this year.

From the Archives: Mitch Paulson and the Art of Color Correction,...

Detail Oriented: Sound Design and the Aural Art of ‘Nomadland’...