The Implied Conversation is our regular feature about the intersection of movies and philosophy. Like all art, film gives us an opportunity to remove ourselves from immediate circumstances and assess the world we inhabit. Each month, Jeremy Philip Galen watches a recent indie release to determine its role in this ongoing dialogue. 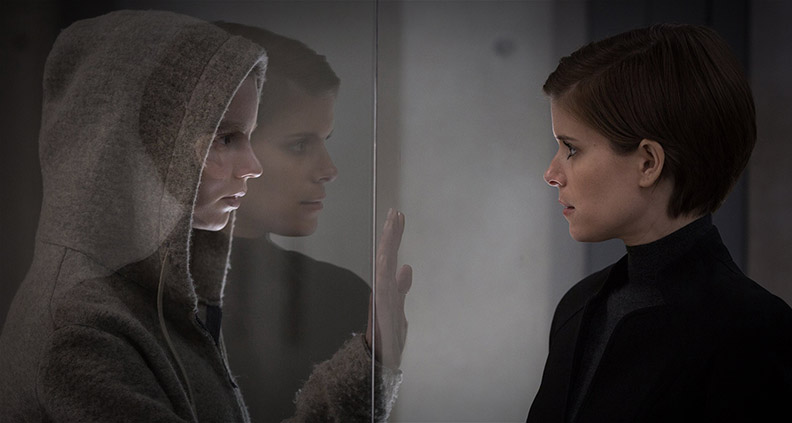 Morgan is a taut thriller with a simple yet terrifically engaging premise. It’s the directorial debut of Luke Scott, son of Ridley, and stars Kate Mara as a seriously corporate risk assessor named Lee tasked with visiting a remote genetic engineering laboratory. The facility is kibbutz-like but has recently been traumatized by the surprisingly violent outbursts of “Morgan” (played by Anya Taylor-Joy, youthful star of The Witch)—their miraculously successful A.I. (artificial intelligence) experiment.

The coolest thing about Morgan is that it poses questions about humans in the context of advanced bioengineering and artificially enhanced cognition. Unlike the growing library of films about artificial intelligence that focus on the status of the new creature, Morgan is only ostensibly a suspense story about engineering and its consequences. It’s far more of a morality play about the humans who dedicate themselves to this sort of science.

Morgan’s creators and caretakers experience emotional attachment and even a familial protectiveness over her. As a sophisticated A.I., she yearns for experience. And as viewers, we can’t but sympathize. Morgan is smarter than we humans are and is growing at an accelerated pace. Of course it wants to connect with the world—how very human!

“She’s special” is the refrain that soaks into the first act of the film more than any other. Watching the film, you get the sense that each one of the project’s eccentric crewmembers is beholden to some profound commitment to science that renders them incapable of not personally identifying with its (the experiment’s) outcome.

The crewmembers keep asking Morgan if she “feels like herself”—a veiled Turing test boiled down to a single question if ever there were one.

But then, it’s like the movie itself becomes a Turing test for us, the audience. When the expert psychologist (played perfectly by Paul Giamatti) interrogates Morgan about her violent episode, we too are held over a barrel: when it’s determined that the A.I. is truly human—or more human then we are—how can we possibly decide to terminate it?

The way in which each researcher-creator recognizes some part of herself in the creature reveals the intimacy of such research, as well as the paradox it creates. The goal is to create an artificial self that’s fully aware of itself as a self, but to do so requires the total investment of oneself in the work (which always seems to take place in secret, isolated laboratories) such that you can no longer impartially judge its progress or its independence from your own identity.

The desire for perfect robots has ancient roots, but films like Morgan make it clear we’re still only at the beginning of puzzling out answers to fundamental questions about how we should behave as the parents of artificial intelligence, let alone our expectations for the moral life of this unique kind of offspring.

The Implied Conversation: The True Value of Art and Expression...

The Implied Conversation: Woody Harrelson Gets ‘Lost in London’...