As July 20 Bring the Noise guest composers Ulises Lozano and Carlos Chairez talk about their process for composing a brand-new score to John Hughes’ Weird Science, the word “experimentation” inevitably keeps popping up. Not surprising, since the film (first released in 1985) is itself all about wild experimentation gone off the rails. But unlike Anthony Michael Hall and Ilan Mitchell-Smith’s beleaguered nerds Gary and Wyatt, Lozano and Chairez’s creations are primarily musical—as opposed to the conjuring-of-an-omnipotent-superbabe variety. But otherwise, the approach taken by both groups of collaborators is the same: just try a bunch of stuff and see what works.

Tomorrow night, Lozano, Chairez and Kinky bandmate Gil Cerezo will take the stage at LACMA’s Bing Theater for our fifth edition of Bring the Noise, lending Kinky’s signature blend of innovative Latin dance rock to by far Hughes’ most madcap and comedic exploration of American teenagerdom. “We’re big fans of John Hughes and big fans of ‘80s music and ‘80s culture,” said Chairez, taking time out from rehearsal to chat. “At first we thought it was kind of weird [to pick Weird Science], but we wanted that challenge.”

Tickets are still available, so get yours ASAP. Throughout 2017, Bring the Noise has featured an original, one-night-only performance of a live score set to a classic film selected by each edition’s guest composer. Past Bring the Noise screenings have featured Seth Bogart (Welcome to the Dollhouse), YACHT (Alien), Bleachers’ Jack Antonoff (The Breakfast Club) and Inc. No World (Gulliver’s Travels). For more information about the series, click here.

A couple weeks ago, we spoke to Lozano and Chairez (minus Cerezo) during rehearsals at Kinky’s Los Angeles studio. The full interview is below: 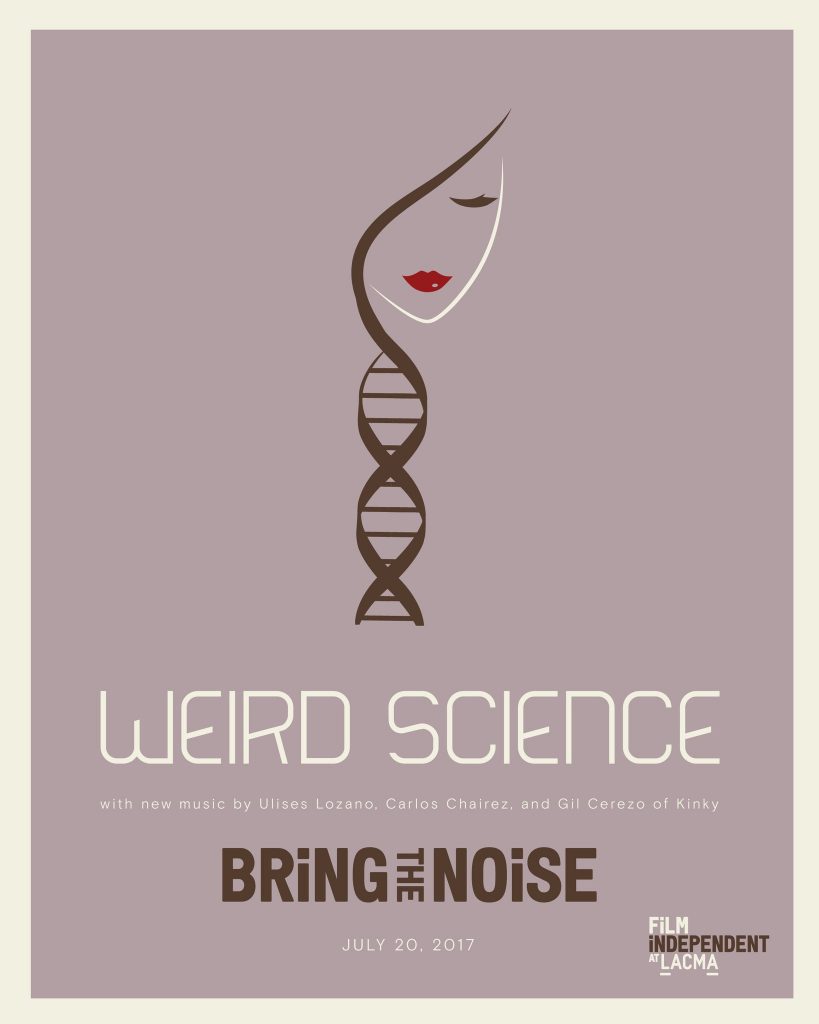 So how did you guys get involved with Bring the Noise?

Lozano: We were contacted by a good friend of ours, Edoardo Chavarin, who’s been a great supporter of all these Latin bands coming to the United States to perform their music. He contacted me and said that Film Independent and LACMA were working on this series of events that were really interesting, and suggested us as part of this selection of artists doing new scores for classic movies.

Why did you pick John Hughes’ Weird Science?

Chairez: We had a couple of different interesting options. Instead of going to something super pretentious, I think we picked something that speaks a lot about us—like, about the goofiness we had when we were that age. Also, [the film] has great music, by Danny Elfman and Oingo Boingo. Re-creating that was a challenge.

How have movies, and specifically ‘80s movies and John Hughes, influenced the music of Kinky, if at all?

Chairez: Like we said, we’re big fans of ‘80s movies and ‘80s culture. I think those movies have been embedded [in our minds] even though we’re from Mexico.

Lozano: The ‘80s was a very important era for music. A lot of that [decade’s] music had a lot of percussion and synths. We have a lot of influence from that era. Kinky has always been about a lot of fun and dance, with all of the synths and percussion.

That leads into my next question: how would you describe the music of Kinky to someone who’s never heard it before?

Lozano: Our music has a lot of fun. It’s about fun and dance and experimenting—combining different styles of music that haven’t been tried before, like combining Norteño music with electronic music, or a Cumbia with Big Beat, or some trap music with accordion. This is kind of our science lab, where we’re with these magic potions, blending them all to see what comes up.

Do you have any other favorite film composers? You mentioned Danny Elfman.

Chairez: It’s hard to deny all the big composers right now. Like Hans Zimmer and Mark Mothersbaugh. These are guys are actually coming from the ‘80s, too. They were in really crazy bands in the ‘80s. Really experimental bands, you know. It’s interesting that they ended up doing these really impressive scores for movies with this eclectic musicality. I think that’s something we really identify with.

Lozano: I enjoy when bands are picked to do the score for a movie. I love all the big composers and the ones we already know, but I love when movies have these ideas. Like, “let’s get a band to score a whole movie!” It’s a more unique vibe. Like Daft Punk doing the music for Tron: Legacy is really, really interesting.

What’s been your process for creating music for Bring the Noise?

Lozano: Just the film itself drives you to have fun. Not to take it seriously, to be experimental. That’s what we love to do: to experiment and go different places that we never thought would be interesting. We were able to do this amazing landscape of sounds and textures. It’s an amazing film for that—to be able to go any place and be able to see what happens and how it matches with the scene.

What’s been the biggest challenge so far?

Chairez: We wanted to approach it as almost never stopping the music. We ended up wanting to have music almost the whole time. You’ll feel it. Sometimes when they’re talking you’ll have a very quiet soundscape happening, and it grows. Something that’s moving all the time. We wanted to be seen on stage, too. We don’t just want to be, like, hiding. This movie is perfect for that.

Tickets for the July 20 edition of Bring the Noise are on sale now—$20 for Film Independent and LACMA Film Club Members and $25 for LACMA Members, students with valid ID and seniors 65+. Tickets are $30 for the general public.

Bring the Noise Braces for Detention April 1 with Jack Antonoff...