In the not-too-distant world of Noah Hutton’s Lapsis the forests of New Jersey are overrun with independent contractors engaged in “cabling”—an esoteric system of competitive power-grid rewiring whose overworked practitioners falsely assume might be an easy way to score a quick buck. As reluctant freshman cabler Ray (Dean Imperial) attempts to shortcut the hierarchical system of leaderboards, tokens and frozen payouts, he quickly discovers that this supposedly “free and independent” economic model might be toxically rigged.

In writer-director Hutton’s words, Lapsis—his debut narrative feature, currently nominated for Best First Screenplay at the 2021 Film Independent Spirit Awards—doesn’t take place in a sci-fi future as much as it does a “parallel present,” with plenty to say about our world’s own increasingly nightmarish gig economy and erosion of social safety nets. It’s also wildly entertaining and darkly funny; like if Paddy Chayefsky guest-wrote an episode of Black Mirror.

We recently spoke to the New York-based Hutton about the film, labor practices both within the film’s narrative and behind the scenes, independent film’s need for more stringent production ethics, and more. Here’s the conversation: 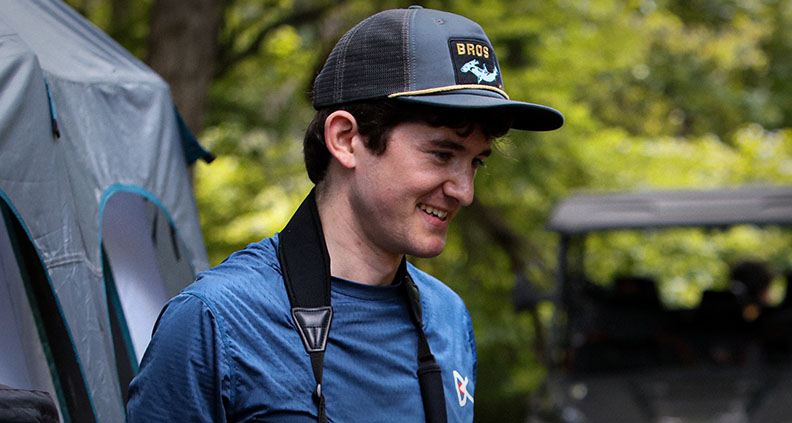 Where did this idea come from? Was there any sort of personal impetus for exploring these issues of the gig economy and late capitalism in this way?

Hutton: The origin kind of came from two places. I actually never wrote the movie thinking of the gig economy specifically. I know that’s the closest thing in our world to what “cabling” seems like. But I really wrote it from a place of having supported myself for the last decade as an independent contractor, as a freelancer in New York going from gig to gig, mostly as an editor of commercials and videos and then directing a little bit more along the way. But still operating as an independent contractor; not having health insurance, buying my own equipment and just sort of understanding that system of labor—which I recognized was more and more becoming the norm in other industries, too. Then certainly with the rise of the gig economy it started to seem like this model had now been seized by Silicon Valley as the way of the future. But some of the characters came from more personal moments, like I have a member of my family who suffered a chronic illness, so kind of drawing on that experience for the brother’s story. Then the third place was, I also have this background in neuroscience. I didn’t go to film school or anything. I studied art history and neuroscience as Wesleyan. I think that kind of led to the conceptual level of the world of cabling. To me cabling was very much like constantly rewiring the brain. I was definitely thinking of brain mechanics for the mechanics of cabling.

That leads into my next question, which is about the world-building of the film. That’s always a challenge with sci-fi, giving the viewers just enough to make the world logical without over-explaining.

Hutton: I definitely wrote a first draft that was very, very long. Much longer than I knew that I would ever want to try to set about making. Then the process of writing drafts of the script was feeling out which elements of the world were necessary and which ones I could cut. Then, getting more comfortable with cutting elements made me more comfortable that the elements that were sticking around were somehow necessary. Some of it is very literal—you need to know the logic of how a certain app works to get what the character is doing—and some of it I think operates on a much more subconscious level. We ended up shooting the script very close to what was on the page. There wasn’t much leeway, because we were really trying to get as much as we could out of our small budget.

Hutton: It was a 26-day shoot, and 75% of the film takes place outside in the forest. So it was three weeks in the forest to start and then one week to end in Queens to do the New York Stuff. We did two-day weekends, which was very important for us. Because of some of the issues that the film deals with in terms of labor and the exploitation of workers, we were acutely attuned on this production to our labor practices, so that no one was working for under minimum wage; I wasn’t asking anyone to come do a favor and not get paid.

Tell me more about that: “walking the walk” in terms of the film’s labor practices.

Hutton: I had made a short documentary in 2018 that was premiered by The Atlantic called “Guts”, about a marine plastics lab in Newfoundland. This lab is an anti-colonial, feminist lab. They do science in a very different way than the status quo, and they had a handbook that they used to kind of organize their work and their relationships. We took that lab book and adapted it into a filmmaking handbook, ‘cause we thought it could be really useful to the independent film production model, which can often be extremely exploitative. It’s publically available on our production company website.

Hutton: What often ends up happening on these films is, you go into it with an open heart, then you start asking for favors and values start to crumble in real time, because of the pressures of time and money. All of sudden people are putting their head down and stomaching the deteriorating conditions. And really, at the end of the day it’s the director who, from the festival circuit onwards, is going to be the only one riding the upward rocket of whatever happens with the film if it’s successful.

It’s so discouraging when you hear some of these behind-the-scenes stories, of a film that purports to be very humanistic in its content, and then you learn that behind the scenes things were terrible.

Hutton: That’s just the unfortunate truth. I think if [the nonunion independent film world] were really up to date with our labor practices, there would be a lot more attention paid to having certain protocols and lived ethics in place. Another thing we did, following from our handbook, is that for all full-time crew we built in an acquisition bonus, so that as soon as the film turns profitable the crew gets an instant bonus out of that profitability at an equal degree. So the boom operator is making the same as the cinematographer from that moment onward.

One thing kind of related to this that I was thinking about that discourages me a lot about auteur cinema it that it often feels very resistant to engage with the present.

Hutton: You mentioned that earlier. I totally agree with you.

While I was watching Lapsis I thought: “Here’s a real movie about what it’s like to be alive now.” It barely even seems sci-fi, it’s just like one world over. Do you think you’ll continue to engage with themes of modernity and technology in your work moving forward?

Hutton: Yeah, I’m pretty much wrapped up in using sci-fi as a kind of way to tease out the dynamics that are already here and now. It’s a great way to look at the present, just to kind of sidestep into what we call a “parallel present.” Sci-fi that goes too distant into the future, you’re not sure if there’s any commentary to be had on the here and now. I’ve already written the next script that I hope to make when that’s possible. It’s also in a kind of parallel present. That’s the mode I’m most interested in. I’m not so interested in escapism.

Lapsis is now available to stream on VOD or in our Spirit Awards screening room. For more information about the film, click here. To see a complete list of our 2021 Film Independent Spirit Award nominees, go here.

Interview: Rodney Ascher’s ‘A Glitch in the Matrix’