When someone declares you “champion” in eighth grade, where do you go next? Such is the question at the center of actor-turned-filmmaker Sujata Day’s debut feature Definition Please. In addition to writing, producing and directing the film, Day stars as Monica, a onetime youth spelling bee champion who is finding out difficult to jump-start her new, adult life. Returning to her hometown to help care for her ailing mother alongside estranged brother Sonny (Ritesh Rajan), Monica discovers that solving her quarter-life crisis is far trickier than “A-B-C.”

Inspired by her time working as an actor on sets run by strong women of color including Issa Rae, Tina Mabry and Debbie Allen, Day (whose credits include episodes of Insecure, Buffy the Vampire Slayer and I Think You Should Leave) was further inspired by success of her friend Justin Chon – a Film Independent Fellow – and his films Gook and Ms. Purple, which demonstrated for her a clear pathway for turning her indie-auteur dreams into a reality.

Definition Please will have its (virtual) LA premiere this Saturday, March 13, on Closing Night of the 2021 South Asian Film Festival of America. We recently spoke to Day about her new film and her journey getting there. 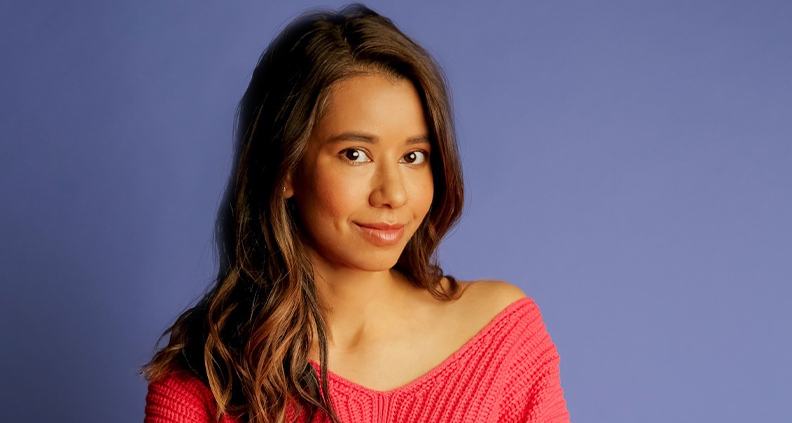 Tell our readers a little bit about Definition Please and what inspired it. I’m curious how much of the story is autobiographical.

Day: Definition Please is about a young woman who’s a former spelling bee champion. Now she’s an adult and she hasn’t reached her potential. It’s based a little bit on a real life experience, but definitely fictionalized. I won my 4th grade spelling bee and then went on to regionals. I lost on the first word—“radish”—which was pretty devastating. I spelled it with two Ds instead of one [laughs]. That experience really stayed with me. I started watching spelling bees on TV and noticed that almost every year it seemed to be a South Asian American kid winning. In the summer of 2019 when we were shooting, there were eight winners and seven of them were Indian American students.

And that kernel of an idea led to the screenplay?

Day: Yeah. In 2015, I was in my Upright Citizens Brigade sketch writing class. We had to turn out a sketch a week and one of my ideas was a “Where Are They Now?” for spelling bee winners. In my sketch, one of them just turns out to be a big loser; that was the general premise. Then I did the Sundance Screenwriting Lab in 2016. I was able to go to the festival as a Sundance influencer, they asked me to go to certain events and take over their Instagram and Twitter. It was fun.

Oh, you got to do one of those? That’s really cool.

Day: Also that year, in 2017, my friend Justin Chon [a Film Independent Spirit Awards Someone to Watch award winner] was there; I saw his movie Gook at the premiere. I cornered him at the after party and asked him how he got it made. He was just, like, “I gathered my friends and family together and asked them for money.” That was very much an inspiration for me to do the same thing. I soft-pitched [my idea] to a couple companies and it got good feedback. But it was the same thing across the board: “We’re not going to greenlight this.” Then in 2019, I went back to Sundance, this time with HBO — I was on Insecure at the time — and Justin’s other movie, Ms. Purple, was premiering there. I was like, “What have I been doing for the last two years?” That was really the push that made me say: “I’m going to shoot this in the summer of 2019 come hell or high water.”

And was the plan always for you to be a one-woman band in terms of writing, producing, directing and starring in the film?

Day: Yeah, the plan was always to be the center as the writer-director-producer-star. I was heavily inspired being on Issa Rae’s web series Awkward Black Girl, watching her do the same thing. I was like, “Oh, I can do this too and it won’t be an issue.” If you’re prepared to wear all those hats, you can pull it off.

Was it important to you to be the one in control of the project and seeing that it made it across the finish line?

Day: It was really important. I’ve been in Hollywood for a couple years and I’ve been auditioning for very stereotypical roles and stereotypical projects. I wanted to portray an authentic South Asian American family onscreen. It’s something I felt I hadn’t seen before and I wanted audiences to be aware that South Asian Americans are not a monolith, we can tell different stories. So it was really important for me to be very specific in that way, where I wasn’t going to get a ton of notes from executives who don’t know what they’re talking about

You obviously have a very long list of credits as an actor. As an actor, what did you pick up from observing the way different sets work?

Day: Two of my favorite directors on Insecure were Debbie Allen and Tina Mabry. They just brought to set with them confidence and respect. They would be on set with us and make us seem like we were really important, that our voice mattered and we were safe to play. I said to myself: “This is the kind of director I want to be.”

This is sort of a basic question, but I’m always curious: what is it like when you’re the director but also acting in a lead role?

Day: It definitely goes back to being the writer of the script, because I was very aware that I was also going to be director and star. So I made sure that my character was not the one carrying the emotional language of the film. That was Ritesh Rajan, who plays my brother in the film. I knew that all of that emotional energy and acting work was going to be put on him, and my character is mostly reacting to whatever he’s doing. That was very much on purpose, because I was aware that it might be a little tough for me to explore that part of my acting while also doing 10 million different other things on set.

What was the first step in terms of financing?

Day: In early 2019 a serendipitous thing happened, where I received an email that said a show I’d sold to a studio was being returned to me along with the rights because of a merger that was happening, and that along with the rights I was also getting a huge check. So I was, “Oh my gosh, this is a sign that I have to make my movie!” So technically I was the first money into my movie. And after that, I put together investor documents, contracts—we got a lawyer onboard right away and I already had my budget with my line producer attached to the project.

You’re doing the festival rounds now. How are you able to maximize the impact of the film in a world where festivals are primarily online?

Day: We’re making the most of it. When things started to shut down in March and April of last year, we had already set up our live premieres at a couple different film festivals and of course those all went digital. There was a brainstorming sessions between me and the rest of the producers, and I said, “Let’s just put it out there.” It was the best decision we ever made, because I do have a project that I’m working on and I’m not someone who does well just waiting around. We had a really great premiere at the Bentonville Film Festival and we started getting a lot of press and some amazing reviews.

Lastly, are you able to talk about what you’re working on next?

Day: I’ve been really productive over the pandemic, which I’m super happy about. I wrote my second feature, which is now getting shown to various actors and production companies. And then I wrote a first draft of a third feature that I haven’t shared with anyone yet. I have a couple different shows I’m out pitching right now. But I’ve been really busy in a very creative, good way, yeah.

Definition Please will be playing this weekend at the South Asian Film Festival of America—see the film guide here. For more information about Sujata Day and her many projects, follow here on Twitter.