Film Independent Fellow Reed Harkness began to lay the groundwork for his acclaimed 2022 documentary Sam Now way back in 1997. His intent then, as an 18-year-old, was merely to document some adventures with his 11-year-old half-brother Sam on Super 8mm footage. Little did he know that 25 years later he’d have an entire nonfiction feature, starring Sam and other members of his family, let alone one racking up awards on the film festival circuit.

In order to fully realize his vision, Reed teamed up with childhood friend Jason Reid in 2015 to serve as editor/producer and participated in the Film Independent Fast Track program in 2020 and the Documentary Lab in 2021.

The project started off as a light-hearted series of films with Reed capturing Sam portraying a superhero character known as “Blue Panther.” But the tone shifted abruptly when Sam’s mother Jois disappeared suddenly. While no one in the Harkness family wanted to discuss the situation, Reed challenged the Blue Panther (and by extension, Sam) to go find his mom as his next mission.

An expedition from Seattle, WA to Long Beach, CA ensued, and Sam Now started to come into focus. And while the search for Jois kickstarts the story, the completed film ends up being a larger portrait of how an entire family processes trauma, and how we all often struggle to escape cycles of destructive behavior.

Sam Now’s impressive festival run has included wins for best documentary at the Zurich Film Festival, Bend Film Festival and Santa Cruz Film Festival, along with recent accolades such as a best editing nomination at IDA and a sold-out screening at DOC NYC in November. The film will be released on May 8, 2023 via the Independent Lens series on PBS.

The making of the film has been a 25-year process. Did you always know that this was something that you wanted to share with the world, or did it start out as more of a private project?

Harkness: As you can see at the beginning, I’m making these experimental short films featuring Sam, and there’s this evolution. I had some idealistic idea that I would be the next Michael Apted or something. But when it shifted into the documentary and the investigation into where my stepmom Jois was, it really became a joke to me. I was like okay; this is not filmmaking… this is something else. I’m trying to help my brother and my family. The shift to documentary felt disingenuous to the filmmaking, so I didn’t treat that as a part of the process until much later. I felt like that was very personal and a family process; whereas filmmaking was always fantasy and fiction, so it was important for me to keep those two things alive with the Blue Panther running against the source material, documentary material and the also the road trip to keep alive the feeling of the adventurous filmmaking. I use documentary as a tool to help unlock doors, but it was kind of artificial to our reality.

Jason, you joined the project in 2015. Did you and Reed know each other before that and how did you meet?

Jason Reid: I grew up around the corner from the Harkness family in North Seattle and Reed and I are day apart in age. My last name is Reid, his first name is Reed, so we have all these connections. We basically grew up right around the neighborhood, riding bikes and playing with toys. I guess I always had a close connection to this story. I got a little disconnected in our teenage years, but our parents ran into each other in our neighborhood still. We both became filmmakers, too. Reed was of course always making films, but for me it kind of came later. I got into feature documentary filmmaking, and really down this path of producing and editing. We reconnected in 2004-2005 and he was already well into making this film. By the time 2015 rolled around and I had a number of films under my belt, it just seemed like the timing was right to partner up. Because of the connection that Reed and I had and my passion for the Super 8 and 16-millimeter films, it was a dream project to work on. 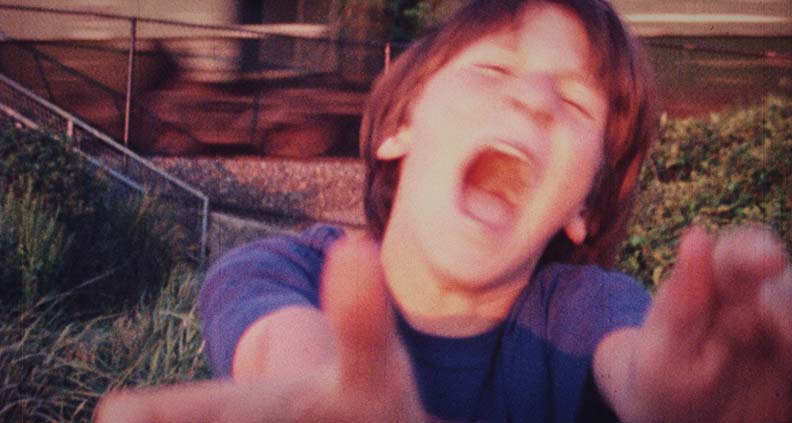 The film participated in the Film Independent Fast Track program in 2020 and the Documentary Lab in 2021. How did those experiences benefit the film?

Harkness: Fast Track was crazy for me because I had never pitched a film before. I had pitched smaller projects, but this was like really putting you on the spot. We were teamed up in groups with people pitching scripted narrative projects that had elaborate decks and we were like okay we’ve got to get some help. The first time I bombed completely. This project has got so much going on and I wanted to say it all, and that’s not a good thing for a pitch. We worked at it and came up with a really good pitch. By the end, we were really impressing people. The process was killer. It’s so tight and so compact. We really walked away winning the hearts and minds of these industry people.

Reid: We had Lisa Hasko [former Fi Director of Artist Development] from Film Independent and Radhi Taylor from Concordia. They were so supportive. The connections we made were really important to us. I think it was the perfect sort of first industry step we took. It was fast and furious though and we were kind of thrown right into it. We just loved the support of Lisa and Daniel Cardone [Manager, Nonfiction Programs] from Film Independent answering every question that we had and being really supportive of the project.

Harkness: The Lab was incredibly helpful. We got grouped with Alex O’Flinn to do some peer review work as a consulting editor and then we ended up going back to him later and did an editing intensive. He was so instrumental in helping us unlock some really big edit moves that we were stuck on. Laura Nix’s insights [as a story consultant] were especially valuable. She was so giving and just sharp cutting with her feedback. We took so much from that, and we kept referring to her notes. We have had a lot of other people reviewing the film along the way, but I would say the Film Independent folks were probably the strongest single reviewers that we got that gave us choice feedback. 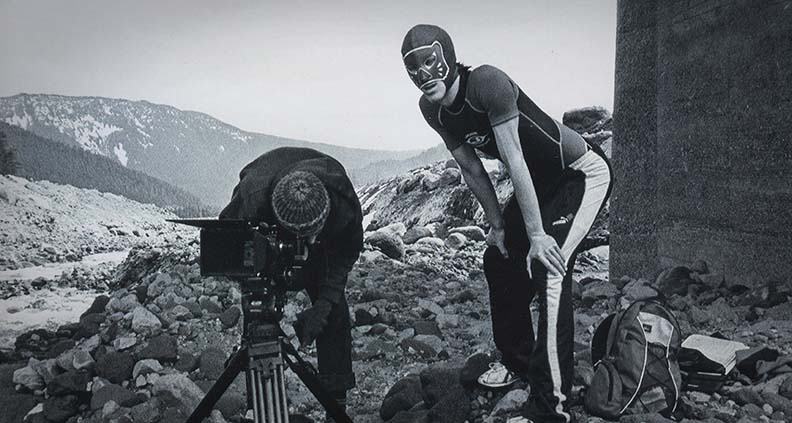 Reid: It was really inspirational to be with the other filmmakers that were selected for the Lab and give them feedback. Everybody had amazing projects. Just bringing in different people who have different roles, such as postproduction supervisors, to help you think ahead to everything that you’re going to be experiencing. To get the Film Independent stamp of approval was really important I think for us, just competence wise, but then everything we learned through the process. After the lab, it took well over another year to finish the movie, but we came out with so much more direction than what we had before.

How many hours of footage was there to go through? I’m not sure if you have an exact number off the top of your head, but it must’ve been extensive!

Reid: There’s definitely hundreds of hours in that first era of footage and there’s at least a 24-hour timeline of Super 8 footage alone that is so beautiful. There’s a massive amount of beautiful parts of the Sam films that are just on the cutting room floor. I would guess there’s at least 500 hours of footage. I think the harder thing is that it’s been shot over 25 years. Knowing that the story is told over 25 years, even if we only had a few hundred hours of footage to represent it, that is an incredibly difficult challenge. There’s a lot of verité movies that go out and shoot for two weeks and they have 1000 hours of footage that that’s encapsulating two weeks, not 25 years.

The film has had such an impressive run so far. Have there been any “pinch me” moments that have stood out to you so far?

Harkness: The Zurich experience was definitely the over the top. Like a “Wake up, this is happening!” moment. For me though the things that most stand out though are when somebody approaches you in the lobby of the theater. One man came into a Cineplex at the Bend Film Festival and after he came out of the theater, he saw me and said “I came in to see Black Adam, but I walked into your movie. My mom left me when I was young.” We’re getting these stories that are just so surreal. 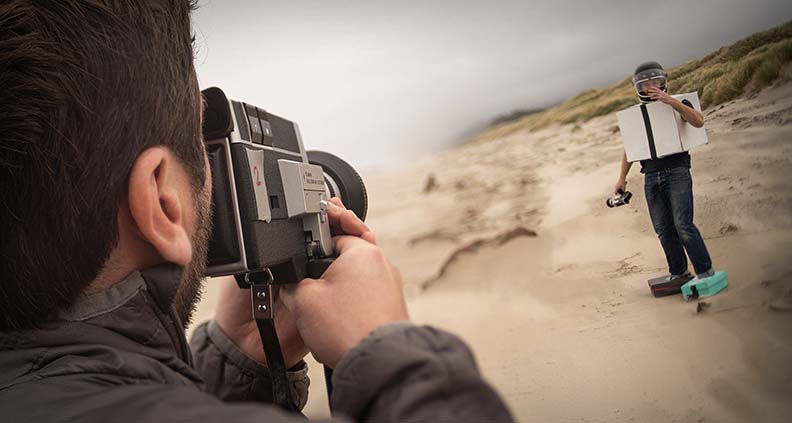 What’s next for the film? I know that you have been extremely busy in 2022 but what is next?

Reid: We’re finishing up our festival run for this year, but we definitely have a lot more festivals and individual screenings planned for 2023. This is all kind of leading up to our May Independent Lens premiere on national PBS. We’re also doing the normal independent filmmaker thing, trying to figure out where else we can get the film so it can be seen as widely as possible. We have the IDA Awards, which we’re nominated for for Best Editing. We’re hoping to continue the momentum that we’ve had for the film over the last few months and just roll that right into 2023.

Fiscal Spotlight Escapes From Gaza, Goes to Prison and Gets Shot