In world where real reality increasingly seems like the far inferior of any two given options, it’s no wonder that virtual/augmented/mixed-reality experiences are gaining steam as not just venues for entertainment and enrichment, but as means of communication, connection and collaboration as well. Take The Under Presents: The Tempest—the new interactive virtual experience from LA-based MR indie studio Tender Claws, which is currently running, with nightly performances extended through September. The show premiered July 9.

Conceived in response to the our nation’s ongoing coronavirus lockdown, the experience’s narrative revolves around an actor—previously scheduled to play Prospero in a version of the Bard’s classic—who, thwarted by his theater’s shutdown in the face of COVID-19, instead guides audience members through an interactive dreamscape-imagination of what the production might have been, with audience members assuming the roles of Prospero’s helpful spirits.

The Tempest is, in fact, a spin-off component of Tender Claws’ ongoing longform experience The Under Presents, which we first profiled in at a special panel at The Portal in 2019, Film Independent’s immersive storytelling showcase. 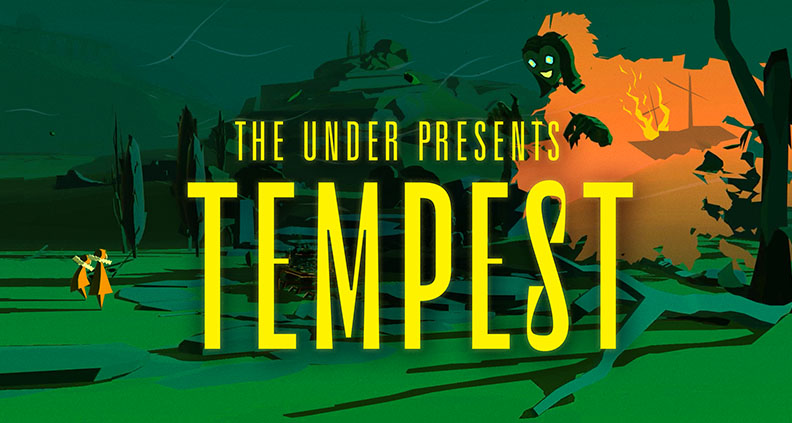 Tell me a little bit about this project—how would you describe Tender Claws’ production of The Tempest?

Gorman: The Tempest is a roughly 40-45 minute one-man show with a cast of about 11 live actors, who are specially trained in this VR theater format. It’s staged in kind of contemporary times, about an actor whose theater has closed—they were originally going to do a live production of Shakespeare’s The Tempest, so you’re going through these different scenes of imagination from the play. You’re fully embodied with other players, interacting with them live in a bunch of scenarios that make you part of the story.

So let’s say I’m an audience member and I put on the headset. Walk me through what I see and what I can do over the course of this 40-minute performance.

Gorman: The first thing is, you put the headset on and you enter The Under in the traditional way, through this kind of atmospheric desert. There’s a flowing golden mask that you grab, and you find yourself in front of these two theater buildings. On the left is a marquee that says The Tempest. I don’t want to give the play away too much, but in the play you’re going through these different steps and experiences and scenes based on the Shakespeare play, and you’re invited at times to take on the different roles of the characters. You get costumes; you’re invited to do different kinds of magic to move forward. There’s a range of things.

And what’s The Tempest’s relationship to Tender Claws’ other current production/experience, The Under?

Gorman: The Under is the sister venue that’s been running since November, that—in storytelling terms—is a long-form narratives. It hinges around a single-player story that tells the story of a doomed research vessel over three acts, where players can follow different characters around the ship and maybe change their fate. That’s the core of The Under. But then another part is this extensive multi-player live hub, where we have pre-recorded shows curated from downtown NY theater performers and a live cast of 18 who can jump into different encounters. So it’s a much longer sustained performance than The Tempest, which is much closer to what we’d understand as traditional theater.

What does a script for this sort of experience look like? How do you put on paper what you want it to look like? And Dasha, as a performer how do you interpret that into something tangible?

Kittredge: They’re very different, The Tempest and The Under. The Tempest had a pretty—it wasn’t necessarily a locked script, but a definite baseline script that we, as the 11 actors, could pull from and make our own as we went through the rehearsal process. For The Under, we together workshopped character ideas and what the goals and objectives of those characters might be. Then it just kind of went off in a LARP-y adventure after that, once we launched. I was a very different process for The Tempest, because we also had Shakespeare’s words that are wonderfully sprinkled throughout the experience. As an actor, The Tempest was more difficult because we put it up so quickly—in two months.

From a producer’s perspective, what’s required to pull it all together in these two months, in terms of personnel or material or technology?

Smith: This project was unique, in that we had rehearsals in headsets almost every day during the period we were prepping the show. That was very different from any project that I had worked on before. I’m a recent Tender Claws family member. I joined when COVID had already kind of started, so by the time I [signed on] we couldn’t meet in person. So the power of being able to get in headsets and connect with actors who I’d never met in person. For me, that was the most amazing part. It boosts morale, too, to be in the same shared space. By the time I joined I was really in the phase of just connecting with the actors and working through any challenges that they might have had—like a tech issue—and just communicating that to the development team.

What are the technologies that are being used to capture and broadcast these performances?

Smith: It’s all in the game engine, the project. So what that mean was essentially we were practicing our show in a ship that we were building as we were sailing it, if that makes sense. For example, all the actors have special powers that they can do, we would be practicing something, and instead of doing the magic power it was supposed to create, like, bread would shoot out. Details of the world or certain features of the world are being developed currently and aren’t in the world yet, so a lot of it requires the imagination of both the production team and the actors to really see how it’s going to be down the road.

Kittredge: The fact that things were going wrong, it gave us [the actors] some practice, because things inevitably always do go wrong eventually. Someone disconnects from the thing entirely, like a player just yesterday disconnected. So you have to be able to work around things that fall apart with improv.

Gorman: These people who are highly trained, like Dasha, they’re super adept at immediately coming up with a narrative world framing for any sort of unexpected thing that could happen. The technology involved is an Oculus Quest—which is a standalone, untethered VR headset. We’re not using any motion capture suits. It’s a little bit like puppetry, inhabited by just the hands and the head, with a build on top to kind of have an invisible interface that also lets our actors cue lights and sound and be their own stage manager.

Samantha, for you what’s the balance between making sure you’re being attentive to your performers and working with them to get comfortable versus dealing with the engineering side of things?

Gorman: It’s a constant double-brain, where you’re looking out on one end for large gestures in the performance to kind of talk over or smooth out patterns in the acting, but on the other end you’re really focusing on directing—what is the interactivity? What is the player’s experience? That’s something I think is probably different than directing actors in a film, you have to be really conscientious of both sides. So that’s where the balance is, between experience design and balancing that and performance.

Christina Applegate Gets Serious and Finds ‘Youth in Oregon’