2018 Fellows from Film Independent’s Documentary Lab program, director Sara Dosa and producer Shane Boris’ most recent offering is the documentary Fire of Love, which traces the lives of Maurice and Katia Krafft, two French volcanologists who spent their lives traveling the world in pursuit of volcanic eruptions to document their discoveries. Both filmmakers and co-editor/co-writer Jocelyn Chaput recently joined Film Independent President Josh Welsh for an in-person Q&A after the feature was screened as part of the Film Independent Presents series.

The National Geographic Documentary Films and NEON-distributed feature is as much about the Kraffts’ as documentarians as it is their natural subjects. Fire of Love spans the arc of their lives as they uncover the secrets of volcanoes unto their death, a spoiler presented at the beginning of the film. [The couple met their fate at the hands of the 1991 Mount Unzen eruption in Japan, where they were trapped in the pyroclastic flow.] In spite of this nonlinear structure, the film draws us to their cause – not just for an education in plate tectonics and volcanic activities – but also for their profound dedication to a life’s work that had also bound them together as a married couple. Throughout their life together, they shared a passion for observing the nature, a relationship that beautifully tows the line between emotion and intellect. 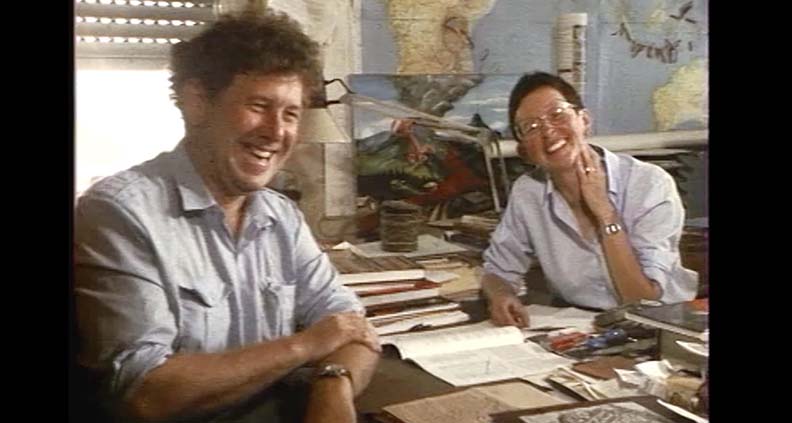 Katia and Maurice Krafft in ‘Fire of Love.’Maurice and Katia have what seems like the ultimate partnership – she takes the photos and writes the books while he makes the films and tours the lecture circuit. Together, they forge a long career in a field as perilous as it is unorthodox, attracting immense popularity in the process. They refine their camera techniques to make the story compelling, with the primary object to capture the staggering immensity of a volcanic beast with dramatic zooms of extreme long shots. The great pains that they take to capture these captivating angles – for example, when the crew have to lug heavy equipment along very arduous paths – clearly shows that depicting their work can be just as challenging as the work itself. Still, their passionate conviction is infectious.

The Jonathan Oppenheim Editing Award winner at Sundance earlier this year speaks to as many senses as possible in conjuring the firsthand experience of a volcanic eruption. Since all the footage from Maurice and Katia’s field work is sans audio, the Fire of Love sound team – re-recording mixer Gavin Fernandes and sound designer Patrice Leblanc – went to great lengths to make their clips come alive.

As we watch the couple don harnesses and flame-retardant suits, maneuver down cliffs, and traverse mountain sides, every visual cue steers us directly into the heat of the action. When Maurice and Katia reach out to pick up volcanic rocks and run their fingers along cooled lava flows in private moments to commune with the beasts they’ve chase around the world, we can feel the intimacy of the work in the same way that we can their relationship. The collision of these worlds blends passive scientific observation with artistic romance – a great feat of Dosa’s documentary. The score by Nicolas Godín (French dramedy series A Very Secret Service) – of the Parisian electronic duo AIR – compounds this synthesis of art and science in an understated yet cool fashion.

More melancholy overtones come to light in the way that Fire of Love depicts the tragedies inflicted by volcanic activity and their destructive power. As the film progresses, we arrive with the Kraffts at villages in Japan and the Philippines, where eruptions have recently decimated villages and taken innumerable human lives. The Kraffts’ also comment on their perception of the inadequate governmental consideration of these ravaging effects, both in terms of preventative infrastructure as well as post-incident relief efforts.

The film builds a theme of death and disaster that is truly unpredictable – volcanoes are the real ticking time bombs that nature has bestowed on us. Without so much as a fleeting thought for their own safety, the couple rush across the world to an erupting volcano at a moment’s notice. That the Kraffts’ fly in the face of danger is no clearer than when Maurice says, “It will kill me one day, but that doesn’t bother me at all.”

A shining example of cogent documentary filmmaking, Fire of Love also tells the story of courtship in two facets: that of the relationship between Maurice and Katia, as well as the perilous dance between the couple and Earth’s volcanoes. There is a striking ambiguity in the way that volcanoes can create vast land masses while also eradicating their civilizations in a flash. A sublime humility toward nature is subtly presented to give the audience space to reckon with these forces on their own.

The balance of using primary source footage with the story of the Kraffts’ private life adds more dimension to the story – they serve as our vessel of both scientific inquiry and romantic pursuit. It doesn’t hurt, of course, that they both happen to be incredibly likable and charismatic people. Blurring thematic lines of the artistic, educational and emotional spheres, the film shows us that their relationship to volcanology and the world at large is one of quiet and personal majesty.

Interview: Rodney Ascher’s ‘A Glitch in the Matrix’