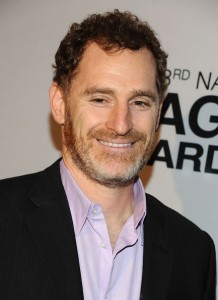 Los Angeles Film Festival Alum Mark Landsman hosted a Live Case Study of the making of his breakout documentary feature Thunder Soul with our members. Here are some of the experiences he shared about taking his project from its origins as an NPR story to a theatrical release through Roadside Attractions with Jamie Foxx as Executive Producer.

In 2006, after turning on the radio and hearing a blast of funk music over the airwaves, Mark Landsman became increasingly fascinated with the NPR story that followed about the Kashmere High School jazz musicians in Houston and their teacher, “Prof” Conrad O. Johnson. Landsman praises NPR and its goldmine of stories as “one of the best sources for stories for filmmakers ever.” Once the story concluded, Landsman went on a hunt for the real Prof. Johnson by calling every Conrad Johnson in the Houston phonebook.

To his delight, Prof. Johnson was enthusiastic about sharing his story. Landsman’s advice on following a story that intrigues you: “Don’t wait. The stories are out there waiting for you. In this day and age, with Twitter and Facebook, communication can be very cold and soulless. Never underestimate making the effort to take a road trip and be present. It can make a huge difference to connect face-to-face with your subjects.”

After traveling to Houston and receiving Prof’s blessing to tell his story in feature form, Landsman also secured the life rights to his story. He recommends getting an entertainment lawyer (although it can be any kind of lawyer) to create a “life rights option.” In order to tell someone’s life story, the subject must give you their blessing in a legal document.

After piecing together funding from different sources, Landsman assembled his team to get the project off the ground. “I knew that I wanted an exceptional vérité shooter. Sandra Chandler, whom I had worked with before, is trained in film and digital. I wanted someone who thinks like a director. It is essential to work with a DP who really understands the subjects and the story. Someone who knows where the story is in the frame and where to rack focus.”

When it came to finding a local crew, Landsman used word of mouth to find the top production people in Houston. However, he maintains that “you never give a key creative position to someone you don’t know.” He also recommends that you lock in your editor and your music supervisor or composer as early as possible, “but especially your editor. I had worked with Claire Didier before and knew she could handle serious content and had cut a few features, which was important. She fell in love and said yes. So, I had my editor. And then you go on your journey and start gathering material.”

Protect and cover yourself and your work. “You need to make sure you have your subjects sign a release written by your lawyer that has your production company’s name on it. Make copies for them, for yourself and for a third party to hold onto. Keep it simple; you don’t want to scare them away. Explain the release to them in a clear, concise way.”

There are three different kinds of releases for documentary filmmaking:

1. Appearances releases — these grant to you the permission to use a person’s likeness, visage and voice for media in perpetuity worldwide.

2. Locations releases — if you’re on someone’s property or shooting any corporate signage, you need to get releases.

3. Materials releases — if, for example, you’re shooting and there is beautiful music playing outside, ask the performers to sign a materials release so that you may use that music in your movie.

Landsman warns: “Lawyers will go through every face and every song in your movie before buying. If you don’t get the releases the first time, you’re at the beck and call of your subject. What an awful situation to be in as a filmmaker.”

The SXSW after-party for Thunder Soul was paid for by the Austin Chronicle, “so we got an extra promotion from them. You have to be thinking like a promoter.” The Thunder Soul team also bought out a full-page ad in the festival program, which was expensive “but worth it.” Not every festival will pay for everything, but they will work with you. Think of yourself not as a guest, but as a collaborator with the festival.

After viewing Thunder Soul, Los Angeles Film Festival programmer Doug Jones saw an opportunity to hold a special event for the film at the Festival. Landsman asked if the band could perform at the event, “and then we had our festival strategy.” At the 2010 Los Angeles Film Festival, the Thunder Soul screening was held in the Ford Amphitheater, “which was really a phenomenal honor for us. Doug Jones really got behind the film.”

The live performance was a huge success: Jamie Foxx’s manager was in the audience at the Ford that night. She called Landsman and said, “I laughed, I cried. Jamie has to see your movie.”

After landing a meeting, Landsman says, “I walked in and am sitting across from Jamie Foxx. He is so passionate about Thunder Soul and it’s a surreal moment. A seemingly random NPR spot and four years later, I’m sitting with Jamie Foxx who wants to help us.” Foxx became attached as an Executive Producer and the film was released by Roadside Attractions.

Thunder Soul went on to win seven audience awards and played in 25 markets across the United States. After playing on Showtime last month, it’s now available on Time Warner’s Showtime on Demand (until Aug. 2) and on Netflix.

Film Independent Members: get tickets to a free screening of Thunder Soul hosted by Jamie Foxx this Sat, Aug. 4! Get details and tickets here >>