“We were envisioning a film that would give a lot of space so we could create an environment [both] musically and sonically.” So says Daniel Aged, one-half of the atmospheric art-soul band Inc. No World of the group’s approach to performing as part of Film Independent’s Bring the Noise series, which returns to LACMA’s this Thursday, May 11. The hard-to-categorize LA-based combo—completed by Andrew Aged, Daniel’s brother—will take the stage to perform a brand-new, reimagined score to producer Max Fleischer and director Dave Fleischer’s dreamlike 1939 adaptation of Gulliver’s Travels. (To learn more, click here.)

Only the second feature-length animated film ever produced after Disney’s Snow White and the Seven Dwarves, the Fleischers’ take on Jonathan Swift’s classic fantasy-adventure saga appealed to Ageds in part due its titular character’s “gentile giant” quality. No surprise when considered against Inc. No World’s brooding, R&B-inflected soundscapes—which somehow simultaneously sound both enormous and intimate. Says Andrew, “the main thing that we’re looking for was something innocent, joyful, fun and open.”

Past Bring the Noise guest composers have include Bleachers’ Jack Antonoff, YACHT and Seth Bogart of Hunx and His Punx. For more information about the series, including how to buy tickets, check out our website.

We rececntly spoke to the Aged brothers at Inc. No World’s rehearsal space in Angelino Heights as they arranged their May 11 performance, baritone guitars in hand. Check out the full interview below: 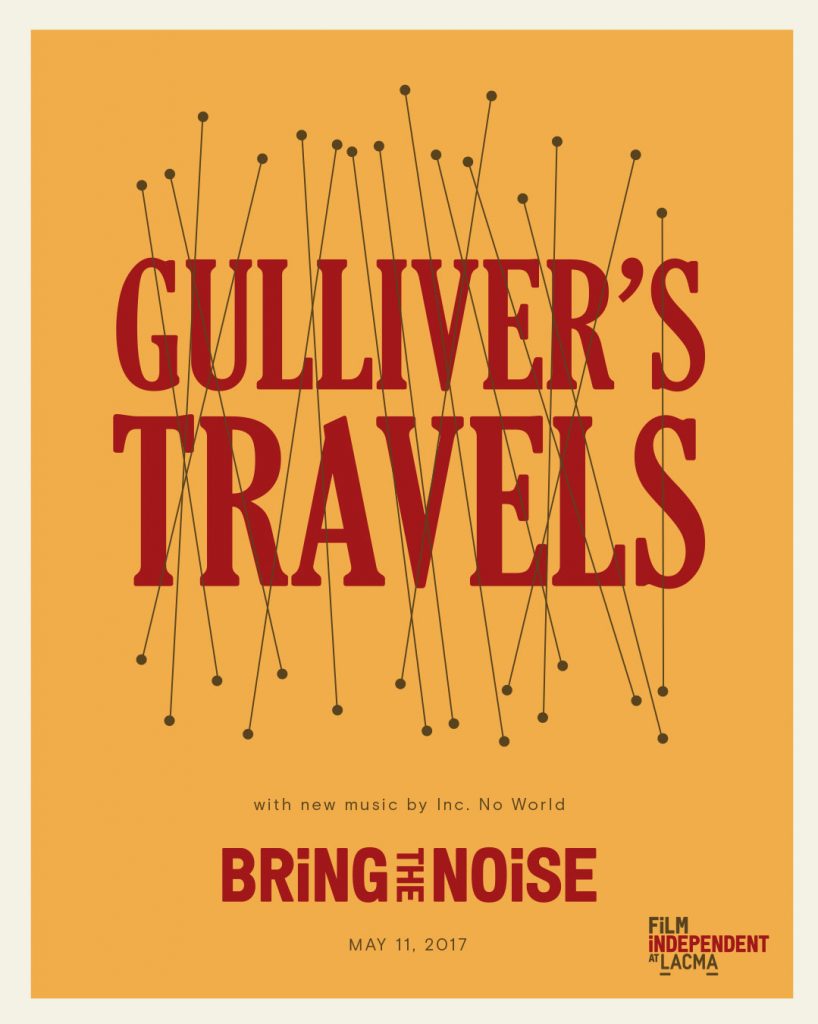 So, tell me a little about Inc. No World. How long has this project been going on and how would you describe what you do?

Daniel: We’ve been around since about 2010. We started incubating before that, but that’s when we put out our first music. The style of music is sort of our own blend of genres and sounds that we enjoy and have always been drawn to.

Andrew: We grew up with Motown, that kind of thing and also grew up in the ‘90s, so there was a lot of alternative music thrown in there. It’s more like gospel-meets-alternative, with a slight amount of electronic influences and production. But we’re instrumentalists based in guitar, so there’s a lot of instrumentation and musicality involved. Generally, the roots are probably Gospel, Soul and R&B. I play guitar and sing, primarily. But for this particular event we’re opening things up and trying different things. I’ll be playing a baritone guitar and some acoustic guitar.

Daniel: I mostly play bass and do some production-type stuff. I’ll be playing base and pedal steel guitar. I’ve been learning that for a couple of years now. We’re also going to have our friend play cello and another friend play drums and keyboard, so we’ll have a full band.

I assume you’ve been playing together since you were kids. Tell me about when that first came together.

Daniel: Music was always around the house. Our parents were big music listeners, and every night there was music being enjoyed. We started playing when I was 11 and Andrew was 12. We kind of just dove right in and got into it.

Let’s talk about Bring the Noise. How did you get involved with this project?

Andrew: We heard about it through our manager, but I’d heard about it before. Gulliver’s Travels was mentioned [as a possible title] and I remembered seeing it as a kid and it resonated, so we though that’d be good. Then we had the idea of having it as a sort of family event.

Daniel: We were envisioning a film that would give a lot of space without much dialogue so that we could create an environment musically and sonically. The animation is really great, too.

Andrew: The main thing that we’re looking for was something innocent, joyful, fun and open. It’s sort of the place we like to play from even in our live shows. That was part of it, looking for something that would offer that. The giant thing is pretty cool, too. How he [Gulliver] is a gentle giant—it’s something you should be scared of, but you’re not.

What are some of your favorite films?

Andrew: I really love Tender Mercies. It’s so innocent and amazing and deep. I think it’s one of the greatest movies I’ve ever seen. It has a similar feel to Paris, Texas.

What about film soundtracks?

Daniel: Good Will Hunting is a pretty strong soundtrack. I remember at the time it really capturing a mood of the film. What’s interesting is that we seem to be drawn to movies where the music is part of the film, like [the 1978 Jamaican classic] Rockers. Or like a musical, in a way, when the scene breaks up into music.

How has film or cinema inspired the music of Inc. No World?

Andrew: One thing we were talking about was film composition that’s also a live musical performance, like Ry Cooder with Paris, Texas or Neil Young with Dead Man. It’s less about composition and more about performance mixed with film. I think that’s our approach to this and that maybe even for the future would be something cool to do.

To check out what you’ve been missing, check out highlights from past Bring the Noise editions and interviews with series Guest Composers:

Tickets for the May 11 edition of Bring the Noise are on sale now—$20 for Film Independent and LACMA Film Club Members and $25 for LACMA Members, students with valid ID and seniors 65+. Tickets are $30 for the general public.

From the Archives: ‘Ask a Pro’ with Film Composer Rolfe Kent