Some wiseacre once observed that in Los Angeles, you’re really never more than 20 or so feet away from a screenplay. And whether a brad-bound hard copy yellowing in the sun of your Uber driver’s seat-pocket or a tidy .pdf open on the desktop of the hyper-focused cold brew enthusiast furiously typing away next to you at the coffee shop, the fact is undeniable: this town is virtually exploding with creativity. And sometimes the explosion is so fierce, it blasts those story ideas right out of their word processors and onto the big screen.

Of course, one such venue that this metaphorical mushroom-cloud has delivered these stories unto is the LA Film Festival—which today unveils its 2017 competition lineup, featuring 37 world-premiere titles, two international premieres and nine North American premieres chosen for the Festival’s US Fiction, Documentary, World Fiction, LA Muse and Nightfall sections. All this, plus 51 short films, 15 Future Filmmaker High School shorts and nine web series episodes. So pack the Visine—because that’s a lot of watching.

“Our competitions reflect who Film Independent is as an organization,” says LA Film Festival Director Jennifer Cochis. “Within each section, you’ll find discovery, diversity and promising talent both in front of and behind the camera.” In fact, 42% of this year’s competition films are directed by women—and 40% by people of color. With short films and web series, 32 countries are represented.

Added Programming Director Roya Rastegar, “the films curated for the 2017 competition reflect the changing political climate’s impact on emerging independent filmmakers, who are compelled to tell stories about darker moments of despair and the powers of conviction, collectivity and resilience.”

So! Which films will be joining our previously announced Opening Night title, Colin Trevorrow’s The Book of Henry (plus special screenings Brigsby Bear and Queen Sugar) at this year’s LA Film Festival? Let’s find out:

Everything Beautiful Is Far Away – USA (DIRECTORS Andrea Sisson, Pete Ohs WRITER Pete Ohs PRODUCERS Saul Germaine, Andrea Sisson, Pete Ohs CAST Julia Garner, Joseph Cross, C.S. Lee) – This arthouse science fiction fable is set on an isolated desert planet, where a man who is looking for parts to repair his robotic companion teams up with a young woman who is searching for an imaginary lake. World Premiere

Compelling, character-driven nonfiction films from the U.S. and around the world.

Dalya’s Other Country – USA (DIRECTOR Julia Meltzer PRODUCERS Julia Meltzer, Mustafa Rony Zeno) – A 12-year-old girl and her mother flee war-torn Aleppo, Syria, and a broken marriage, to begin a new life in Los Angeles. As the only hijabi in her all-girls Catholic school, Dalya navigates Syrian traditions while forging her own identity as an American. World Premiere

Monkey Business: The Adventures of Curious George’s Creators – USA (DIRECTOR Ema Ryan Yamazaki PRODUCERS Ema Ryan Yamazaki, Emily Harrold) – With rare archival footage and animation, this is the unbelievable true story of a couple who escaped the Nazi encroachment on Paris with few belongings, including a manuscript featuring what would become the beloved children’s character, Curious George. World Premiere

Out of State – USA (DIRECTOR Ciara Lacy PRODUCERS Beau Bassett, Jeff Consiglio) – After a cultural transformation at an Arizona prison, two native Hawaiian men return to Hawaii in the hopes of starting anew. As they wrestle with inner demons and outside pressures, they wonder: Can you ever truly go home again? World Premiere

Stella Polaris Ulloriarsuaq – GERMANY / GREENLAND (DIRECTOR Yatri N. Niehaus PRODUCERS Yatri N. Niehaus, Laali Lyberth, Nomi Baumgartl, Sven Nieder) – The Kalaallit people of Greenland have been connected to the ice for millennia. Under the guidance of a shaman, people from all walks of Greenlandic life gather to illuminate glaciers and icebergs on star-lit nights while the foundation of their traditions literally melt beneath their feet. World Premiere

Two Four Six – RUSSIA / USA / HAITI (DIRECTOR/PRODUCER Leyla Nedorosleva) – These kids are not stars. Not yet. For these extremely tall Haitian teenagers, the stakes involved in coming to the United States for a basketball scholarship are higher than the possibility of a slim shot at the pros. World Premiere

Unique fiction films from around the world from emerging and established filmmakers.

The Night Guard – MEXICO (DIRECTOR/WRITER/PRODUCER Diego Ros CAST Leonardo Alonso, Ari Gallegos, Lilia Mendoza, Héctor Holten) – A security guard at a construction site learns about a crime that took place the night before and becomes entangled in a series of mysterious events that unravel over the course of a single night. North American Premiere

On the Beach at Night Alone – SOUTH KOREA (DIRECTOR/WRITER/PRODUCER Hong Sangsoo CAST Kim Minhee, Seo Younghwa, Kwon Haehyo, Jung Jaeyoung, Song Seonmi, Moon Sungkeun, Ahn Jaehong, Park Yeaju, Karl Feder, Mark Peranson, Bettina Steinbrügge) – Younghee is an actress who is stressed by a relationship with a married man in Korea. On the beach she wonders: Is he missing me, like I miss him? North American Premiere

Fiction and documentary films that capture the spirit of Los Angeles.

The Classic – USA (DIRECTOR Billy McMillin PRODUCERS Christopher Leggett, Rafael Marmor, Timm Oberwelland, Billy McMillin) – Two predominantly Latino high schools square off annually in one of the oldest and most heated football rivalries in the country: the East LA Classic. It doesn’t get more American than this. World Premiere

Mighty Ground – USA (DIRECTOR Delila Vallot PRODUCERS Aimee Schoof, Isen Robbins EXECUTIVE PRODUCER Natalie Irby) – A gifted singer who is struggling with addiction on the streets of Skid Row sets out on a journey to transform his life. World Premiere

From the bizarre to the horrifying, these are films to watch after dark.

Serpent – SOUTH AFRICA (DIRECTOR/WRITER Amanda Evans PRODUCER Greig Buckle CAST Sarah Dumont, Tom Ainsley) – When a young couple take a getaway aimed at reviving their romance, they find themselves trapped in a tent with a venomous snake and a backlog of secrets, and they come to the realization that only one of them can make it out alive. World Premiere

Also announced were 51 short film selections, culled from over 2,700 submissions and representing 12 countries, 45% of which are directed by women and 51% by people of color. Short films will play before select features and/or as part of one of six different shorts programs competing for narrative and documentary jury prizes as well as the Audience Award for Best Short Film.

In addition, our Future Filmmakers Showcase returns once again, featuring the very best short films from budding young filmmakers from across the globe (60% of whom are young women). Comedy, drama, animated, experimental—you name it! The program is sponsored by Time Warner Foundation and Lisa Argyros / Argyros Family Foundation and Employees Community Fund of Boeing California.

And of course, who could forget our episodic category—featuring nine series and celebrating rising digital creators whose work and subjects are equal parts innovative and unfiltered, 70% of which are directed by people of color and 40% by women. 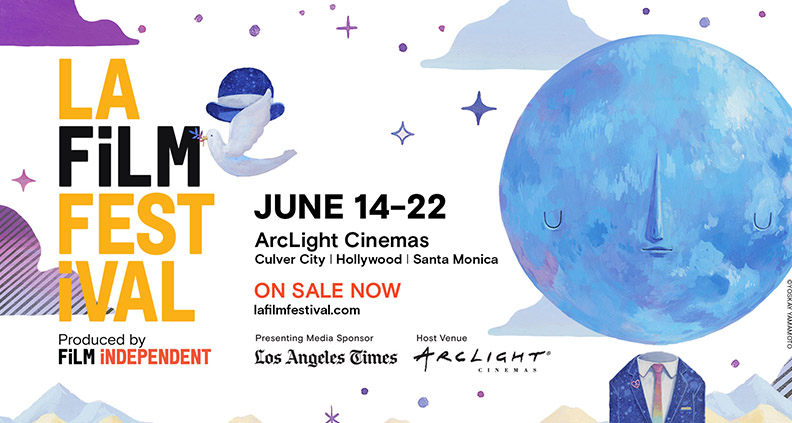 Passes are on sale now. Film Independent Members get early access and save up to 25% so become one today. In addition to screenings and special events (even when sold out) Festival passes provide entry to our super-fun Festival Lounge, featuring a 21+ hosted bar and the opportunity to rub shoulders with Festival filmmakers and other film industry professionals. Buy yours today.

Individual tickets go on sale to Film Independent Members beginning next Tuesday, May 16 and to the general public on May 23. For more pass, ticket and event information visit tickets.lafilmfestival.com.

(Slider: Madelyn Deutch in ‘The Year of Spectacular Men’; Header: Mackenzie Davis in ‘Izzy Gets the Fuck Across Town’)

DIVERSITY SPEAKS: Newlyweeds Director Shaka King On How He Got...