Like skydiving or audibly passing gas in front of a future spouse, you never forget your first time directing a feature film. After all, nothing can quite prepare a freshman filmmaker for the experience of being on set—butt settled deep into the collapsible canvas hot seat, filtering an unceasing stream of questions and communicating (ideally) a clear and decisive creative vision for the film. Those who can do it at all are practically superhuman. And those who can do it at the highest level? Well, those would be the five filmmakers nominated for Best First Feature at the 2021 Film Independent Spirit Awards.

More specifically, they’re Radha Blank (The 40-Year-Old-Version), Heidi Ewing (I Carry You With Me), Channing Godfrey Peoples (Miss Juneteenth), Edson Oda (Nine Days) and Darius Marder (Sound of Metal), who were all on hand for the featured session of Week Four of the Film Independent’s annual Directors Close-Up series—which thus far has featured this award season’s top Best Feature directors, TV Creators and nonfiction filmmakers (of both Feature and TV/streaming Docuseries varieties.)

To see what else is coming us at DCU and how to (virtually) attend—either live or On Demand—just click here. Keep reading for Week Five highlights and check out our video recap below:

Moderating the panel was Darrien Michele Gipson, Executive Director of SAGindie, who opened up the conversation by observing that despite their newness to the fitted topaz jodhpurs of the narrative feature director, all five filmmakers have extensive film industry experience in different areas. “What did you gain along the way working in film before you took this giant leap?” she asked.

Heidi Ewing (whose star-crossed romance/immigration drama I Carry You With Me will be released by Sony Pictures Classics this May) said that her 10+ years working in documentary films left her prepared in several ways, but not all. “It felt like jumping off a cliff,” she said—particularly working with actors. She found it easier to adapt her “voyeuristic” nonfiction approach to narrative, deploying a camera that reacts to action rather than anticipating it and working hard to infuse each scene with a subjective, character-based visual point of view.

Marder recalled his origins as an actor, riding on the subway in New York to a rehearsal, pockets stuffed full of miscellaneous detritus intended to help ground the reality of his character. “The work you do when you fill your character with these unseen truths, how that changes the energy of a scene,” was something he found useful as a director on Sound of Metal as well, he said. He also stressed editing—“The most important thing you can do,” to prepare to be a director, he said. “You see everything when you edit. It’s an incredible muscle to build.”

For Blank—the recent recipient of an NAACP Image Award for her work on The 40-Year-Old Version—her time on sets as a PA early in her career taught her to treat people with kindness. “I remember being anxious, being hungry, wanting to make a good impression and getting the brunt of people’s not-so-great moods.” On the Version set, “I would go out of my way to be especially nice to the PAs.”

Gipson asked the filmmakers about the difficult process of casting and working with actors. For Peoples, it was critical for the integrity of her film to find an actor who could authentically fill the pageant-heels of Miss Juneteenth’s Turquoise. “We looked far and wide for professional actors, but I really wanted to find a young person from the region, who could walk and talk as a young black girl from the South side of Fort Worth.” That person ended up being Nicole Beharie, currently nominated for Best Female Lead for her work in the film.

Edson’s situation for Nine Days (a metaphysical indie drama about personified souls waiting in limbo to be born, also to be released this May by Sony Pictures Classics) was a little bit different. “It was almost experimental,” he said of his approach to developing the characters alongside a cast that included Winston Duke, Zazie Beetz and Best Supporting Male nominee Benedict Wong.

He explained: “They’re souls. They’ve never been born, so there’s a way you can go [in terms of depicting their reaction to Earth] where it’s super-new, where they’re amazing by everything.” Instead, he and the actors settled on a more measured approach. “The DNA of that information [about Earth] is in their head, but they’ve never felt that experience,” he says.

“I was really interested in setting up a shoot with high stakes—that was my challenge to Riz,” said Marder, of working with current Best Male Lead nominee Riz Ahmed, who for Sound of Metal had to master not just an American accent, but train himself into a live-performance-caliber rock drummer as well as, crucially, a proficient user of American Sign Language. “I had no doubt Riz would eat this up,” said Marder. “He’s hungry in a way that isn’t desperate. He’s hungry in the way an artist is hungry: for experience.”

Gipson asked what the biggest “Oh shit!” moment was for each of the directors on set. “It wasn’t until I was on set that I thought, “Oh fuck, you idiot and your big ideas,” laughed Blank, who reached Day 19 of a 21-day shoot before finally almost breaking down, she said, in her lowest emotional moment on set.

In the early days of I Carry You with Me, Ewing—used to three- or four-person documentary crews—was overwhelmed by the size of her Mexican crew. “This is a small crew [for Mexico],” her producer told her, as Ewing marveled at the 50-person swarm of team members. For Peoples, challenges presented themselves right away on Day One of filming, as she frantically tried to steam some footage of a local Fourth of July parade while literally juggling her newborn baby.

On finding the right collaborators for his years-long journey to get Sound of Metal made, Marder said, “I was lucky that the people who weren’t up for it, they showed themselves over the years. It was like natural selection.” Said Ewing: “Thank god I didn’t know it was so terrifying—I don’t think movies would get made it we all knew what it felt like,” to actually be on set calling (literally) the shots. 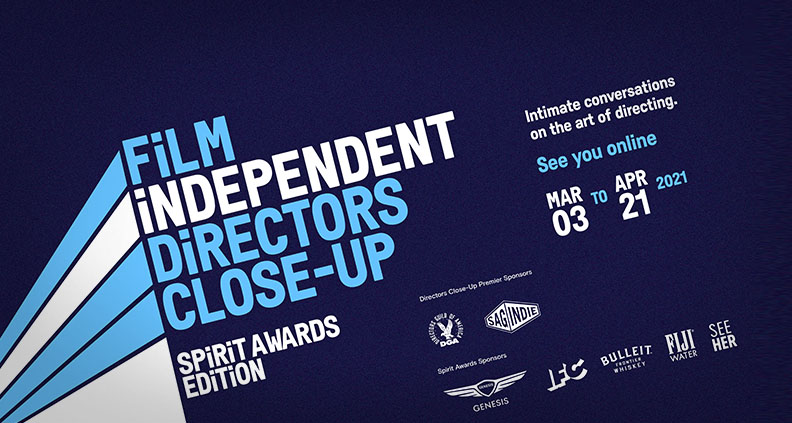 Regardless, all five directors agree that they’ll be back for more just as soon as global coronavirus circumstances allow. After all you never forget your second either.

This Week: International Filmmakers on the Global Screen

Directors Close-Up: Why The Docuseries is King, According to...

Directors Close-Up: How Writers Work with Directors (and How...