Editor’s note: the below piece originally ran of Film Independent’s website two years ago. The deadline to apply to the 2021 Documentary Lab for non-Members is December 17, while the extended Member deadline is December 23.

As with many great documentaries, Dyana Winkler and Tina Brown’s United Skates uses the colorful subculture milieu of its ostensible subject, in this case African American roller-skating rinks, to explore deeper social ideas. The film—which recently concluded an Oscar qualifying theatrical run and will be premiering wide on HBO in February 2019—uses roller skates to explore hard truths about the intersection of race, community and capitalism in America.

But before the film was serving as the subject of an expansive New York Times long read or earning a whopping 100% fresh rating on Rotten Tomatoes, it was one of six new projects being shepherded through the 2016 Film Independent Documentary Lab, with Brown as Winkler as two of the lab’s 10 2016 Fellows.

We recently caught up with Winkler about United Skates’ remarkable journey over the past two years, her experience with the Film Independent Documentary Lab and why you should always have a side project. Here’s the conversation:

So, when you have a project like this in the can and your release date is still a couple months away, are you still refining it or is it pretty much locked at this point?

Winkler: Oh, it’s locked. What we’ve done since Tribeca is we’ve been on the festival circuit. We’ve been in over 40 film festivals traveling with the film, showing the film to the communities in those cities. And we’re doing a run for Oscar shortlisting right now, actually.

Are you relieved to have gotten the film this far, or are you overwhelmed that there’s still so much more work to do?

Winkler: People keep asking us if we’re pinching ourselves or if we’re in shock. We were in the New York Times yesterday. We were the New York Times critics pick this week. We’re in theaters. We’ve been really lucky. The honest truth is that we’re still working so hard to get the deliverables to HBO, to do this campaign and all these things. We haven’t really had that moment to pause and reflect and take in all the amazing things that are actually happening.

I want to take a step back. Take us through the decision to apply to Film Independent’s Documentary. How did that cross your radar?

Winkler: We’re huge fans of Film Independent. We already had gone through your Fast Track program, and one of the things I always say is, in the earlier stages of making this film, we hadn’t gotten a lot of support from granting organizations yet. And Film Independent was one of the few organizations that believed in us very early on. When you have the support of an organization like Film Independent, it helps get the ball rolling. It was after Fast Track that the Film Independent team had encouraged us to apply to the Doc Lab, and we were probably a bit too early for the lab, in hindsight. We didn’t even have a rough cut. We only had, like, the first 60 minutes and it was a hot mess [laughs]. 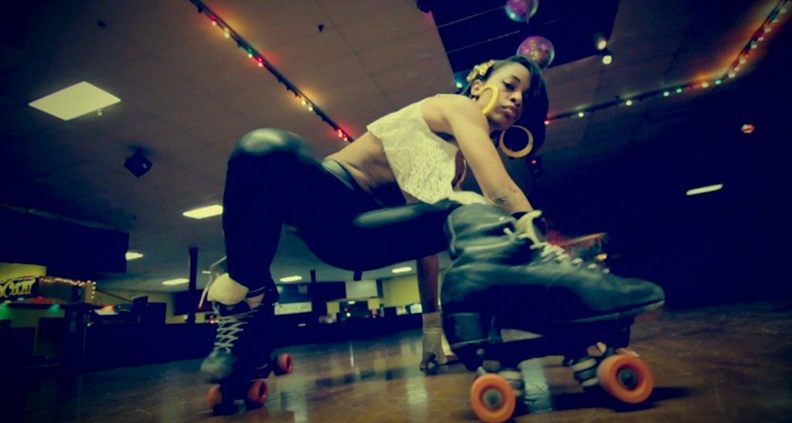 Tell us about working with some of the lab mentors.

Winkler: I think my favorite was Jen Arnold, just really breaking down the hard facts of telling a story. She ended up working with us afterwards for another three days privately to help us with finding our story. Also, they brought in a fair use attorney that year. That was really helpful for us, I learned a lot about how to edit so that we were able to use the footage without using huge licensing fees.

Was there any tithing you were struggling with that the lab helped clarify for you or offer a solution to?

Winkler: I would actually say it was fair use, because we were shooting side of roller rinks, and the number of challenges with that is unending. There was music playing in the background, so one of the things we were able to learn was how to think about editing scenes to that the music in the background at the rinks could be used as fair use so that we didn’t have to, y’know, license Kanye [laughs]. That helped a lot. For example, one of the things we learned is that if you have a single take, if you’re shooting something and you stay on that single and you don’t cut away to another shot and it’s all in that one single take, it’s fair use to use the music underneath it. But as soon as you edit it, and you cut to people on the sidelines or people putting things in lockers and you cut back, then you have to license the music. So we knew that, okay, if we can just make something be one long shot, one take, then leave two or three seconds to fade it out either side, that helped us think about when we were shooting things and also, when we were editing, what we could do to make it work.

Tell me about some of the other Fellows who were in the program with you.

Winkler: We became close friends with the filmmakers who made Shot in the Dark—they were living in New York and I was also living in New York, so we had all sort of flown out to LA for the lab. And then also Smriti Mundhra and Sarita Khurana, the name of their film is A Suitable Girl, about arranged marriage in India. We got close with them and they ended up premiering at Tribeca the year before us. We were earlier [in the filmmaker process], so we got to follow in everyone else’s footsteps and learn from them, which was great.

I wanted to end by asking if there’s anything you’re currently working on as a follow-up to United Skates.

Winkler: I have a feature screenplay that was at the Sundance screenwriters’ lab last year that I’m co-writing. And we actually just brought on a producer who had just gotten the Film Independent Alfred P. Sloan Producing Grant. I was going to say, one challenge I had was that I was living in New York, so I flew out to LA for the month kind of ready to dive into this all-intensive lab. I didn’t realize that it was only two nights a week. So I had all week long, all these days in LA. So I used that time to write the other project while working on United Skates. I only say that to say, if you’re coming from out of state to think about what else you could do while you’re out in LA to make the month as impactful around the ab.