In Part One of our two-part interview, makeup artist Angie Wells and hairstylist Daniel Curet talked about what it was like to swap out radically different looks for star Carey Mulligan’s Cassie on the set of Emerald Fennell’s Promising Young Woman, turning the Best Female Lead nominee’s revenge-seeking antihero from med school dropout to femme fatale.

Today, the duo shares with us what went into crafting Cassie’s unforgettable look for the final sequence of the film (which, SPOILERS!) and why she sports a mismatched pastel manicure throughout the film. 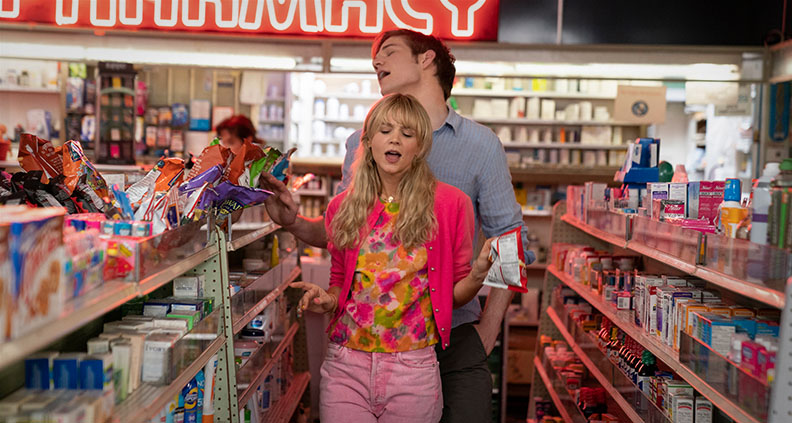 One of the most lighthearted and hilarious scenes is when Cassie and Ryan (Bo Burnham) lip-synch to Paris Hilton’s “Stars Are Blind” in that scene in the pharmacy.

Curet: Originally, I wanted to have low pigtail braids on Cassie for that scene. But with the dancing choreography it became too distracting. We didn’t want it to be too “bubblegum cute” all of a sudden. So I changed it to a half-up, half-down style at the last minute.

Wells: She was really having fun in that scene and the most relaxed we’ve seen her, so I added more blush on her but still kept it soft–rosy cheeks always say “happy” and “upbeat.” 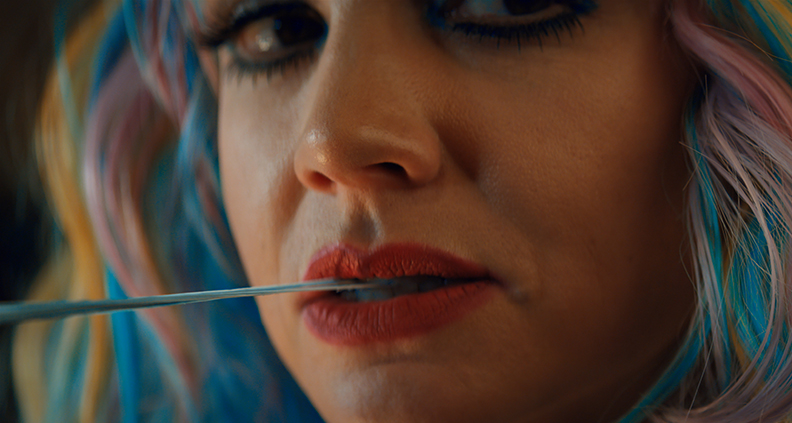 What are the techniques used to make her evening look drastically different?

Wells: I tried to keep her “everyday” look youthful. I didn’t do any contouring on her daytime look–I wanted her face to look softer and rounder by applying the blush on the apples of her cheeks, because that’s how we tend to look when we were younger. Leaving her daytime look very simple provided a blank canvas, which gave me a lot of leeway to expand. To complement her different personas at night, for example, in that scene where she was sporting the high ponytail and her “nurse” look at the end of the film, I used darker shades and black liners, and a lot of contouring which I purposely didn’t blend perfectly because I wanted to make it look like she did the makeup herself.

That was part of the sequence where she shows up as a stripper at the bachelor party?

Wells: Yes, that was a lot of fun to do! I loved what Daniel did with her hair because it gave me a great frame to work on with her face. The way her multi-colored bangs framed the face made her eyes really stand out, which was perfect because that is the first thing you notice on her–those giant eyes and the intense lips.

Curet: I anchored that look on Brigitte Bardot. We found one wig with heavy fringe that we wanted, but another one with better color and one length. So we married both wigs together, restyling and cutting them to Carey’s liking. This was the first time she gave me some guidance–she insisted on having that length. The thing about her disguises is you don’t want to render Cassie unrecognizable to the audience, so all the looks have to tie in together somehow. Except for the high ponytail look when she went to the glam bar, all the other looks were a variation of her own hair with easy transitions from day to night, so that it’s believable that Cassie did her own hair. The one exception is when she got into the nurse stripper costume, because she didn’t want any of the guys at the bachelor party to recognize her.

What were some of the techniques you applied for that final sequence?

Wells: I used some theater techniques to make her eyes look larger. I lined her eyes outside of where her natural eye line would be, so beneath her lower lashes as opposed to in her lower lashes. I used the flesh tone color so that it would make the whites of her eyes appear larger. I also used a lash on the bottom as well as on top; that eyeshadow style was for contouring and color. All this created this wide-eyed look. And then instead of going with the expected red lips, since her wig had that wonderful rainbow pastels, I used pink from the wig as opposed to red from the trim of her outfit. That’s how she ended up with the fuchsia/magenta lips.

Throughout most of the film, Cassie sports a different pastel color on each nail. Is that meant to be another hint of her stunted adolescence? Or was it simply a cool look?

Wells: I came up with the candy-colored nail palette, and Emerald really liked it. Based on what I had read from the script, I chose the pastel look because it reminded me of the candy necklaces that kids wear. It goes with the part of her that’s still a young girl in a lot of ways. That nail art is also something you wouldn’t expect to see on a woman out doing terrible things that are considered tough and dangerous. It was a good contrast to show that Cassie was stuck in limbo between young college girl and adulthood–and sometimes her youthful self still peaks through the bitterness.

Curet: On the set, I would see these vibrant pastel colors in the coffee shop and the pinks and lavenders in some of her dresses, and then the nail art that Angie had designed. All these guided my choices when picking ornaments for her, but the common denominator was Emerald, who gave us all those clues. Everything came together to infantilize her personality, because she remains stuck in the past.

Promising Young Woman is available on VOD and playing in select theaters. The 36th Film Independent Spirit Awards, hosted by Melissa Villaseñor, will be broadcast exclusively on IFC Thursday, April 22 at 10:00 pm ET. Check out all of this year’s nominees here.