Last year, Film Independent and the U.S. Department of State partnered together to launch Global Media Makers, an innovative mentoring initiative connecting visual storytellers from around the world with leading U.S. entertainment professionals through specially tailored mentorships, workshops and master classes. With these blogs, we’ll be catching up with some of our 2016 Fellows to see how their projects are advancing, as well as recap what they learned during their May 2016 residency in Los Angeles.

Moroccan writer/director Houda Lakhdar is thoughtful when she talks about her close friend and creative collaborator, Sofia Aissaoui. The two filmmakers—who met at Ecole Supérieure des Arts Visuels (School of Visual Arts, ESAV) in Marrakesh— found in each other kindred spirits. They’ve been working together ever since. But interestingly, neither one started out wanting to become a filmmaker. Aissaoui wanted to be a journalist, while Lakhdar studied architecture. Both women found their way to filmmaking by discovering their love for stories and their desire to explore issues in greater depth through stories.

Together, Lakhdar and Aissaoui are rising stars of the Moroccan film and TV industry. Lakhdar wrote for the TV series Al Hayat Saida. Her short, ZahraII, aired on TV5Monde last year and was screened at the European Parliament in Brussels to represent women in the Moroccan film industry. Aissaoui has been writing for television since graduating from ESAV, and has worked on projects with agencies like PNUD and UN Women. She recently completed her first short film Wind, which she directed and co-wrote.

Lakhdar and Aissaoui’s 2016 Global Media Makers project Belly of Hope (which they’re co-writing and co-directing) deals with women’s rights and role in society, telling the story of a young mother who takes a bold stance against a patriarchal system as she struggles to keep custody her child after a divorce. While in LA, the pair directed a scene from the film under the guidance of Lab Mentor Jeremy Podeswa (Game of Thrones), an experience that helped them redefine themselves not just as filmmakers but also as women telling women’s stories.

Tell us, what have you been doing since the program?

Since coming back to Morocco we’ve been working on our draft [of Belly of Hope] but also focusing on separate personal projects—especially short films, which we’re looking to produce as soon as possible. We miss being on set!

How did you each come to be a filmmaker?

Lakhdar: I was initially on the path of becoming an architect. To me, architecture is the mother of all arts. Once you speak its language, you can basically start to understand the purpose of everything that is willing to be expressed and come to life. Louis Kahn used to say, “Listen to the brick, it knows exactly what is wants to become.” When I heard that, it immediately spoke to me. I became totally inspired. Gradually, I discovered all the stories I wanted to express beyond space, and I decided to push my path further into filmmaking. This might be why space has such an importance in my work.

Aissaoui: I wanted to become a journalist after high school. One afternoon, I randomly went online and found ESAV Film School. I started looking it up and answering some questions that were on the site. It’s crazy how a list of questions about your favorite films, music and angles can open your eyes. It made me realize that deep down, I wanted to be subjective in telling stories. I was going to be a bad journalist in that way. So film school was the next step for me.

You two are a very strong team. How did you meet, and how did you find your dynamic as a team?

Lakhdar: Our first encounter was during a theater class. We were practicing some body exercises on the floor. I didn’t know that would be on the program that morning, so I was wearing a dress. When I kneeled on the floor I felt a finger poking me on my back. And there was Sofia, telling me she had my back. It was the first time I ever saw her face and eyes, but mostly her beautiful heart.

Aissaoui: We became friends gradually during the year. We always asked for one another’s opinion in our work. We didn’t expect to work together; it was more about supporting each other. Then after school, the dynamic kept going as we embarked professionally on different projects, and grew together.

How do you work together as directors? How do you resolve disagreements?

As storytellers and directors, we tend to focus on what we agree on because that’s why we’re doing it together in the first place. But I believe the key to all partnership is deep respect and total honesty. When we disagree, we discuss it and try to convince one another of what would be the best idea for the project. A certain sense of truth imposes itself on us. Those discussions and arguments make us stronger in our bond and collaboration.

Are there any films or filmmakers that have been definitive influences on you?

Lakhdar: I think all the films we watch shape us. Sometimes it’s not even a scene but a moment, a breath or melody of some sort. But if I had to pick, I remember how Wong Kar Wai’s work—especially In the Mood for Love—had given me the concrete desire to dream and let myself believe in a beautiful melancholy during a time I felt lost in my own life. It was like my emotions translated into cinema.

Aissaoui: In Xavier Dolan’s Lawrence Anyways there’s a scene where Lawrence goes to breakfast with her girlfriend and Suzanne Clément snaps at the waitress who’s criticizing their life choices, the emotion of which is really embodied by the camera and the angle of the scene. It works beautifully, in such a raw and sharp way that to this day it still makes me aim for such a sense of truth in the manifestation of anger. 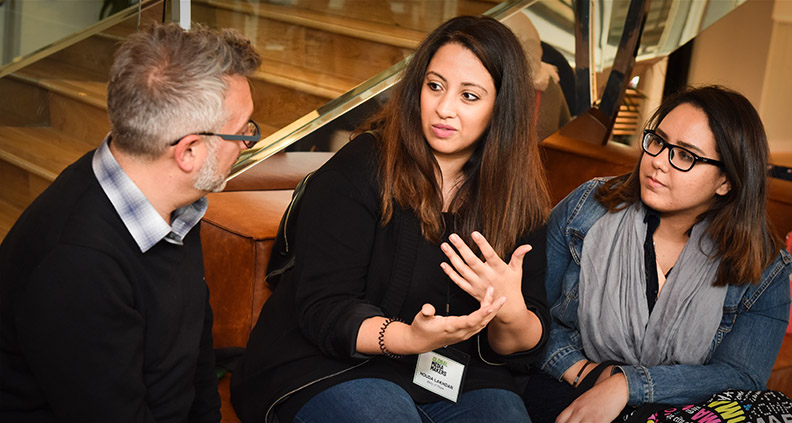 Do you have any tips for people who want to come to Morocco to film?

The Moroccan Film Industry has really grown and expanded over the years. We’re proud to be a country that has so many foreign shoots. The landscapes are amazing and the local technicians and producers are reliable and talented. It makes the machine keep rolling in a very efficient and rich way.

What’s your favorite memory of your time in Los Angeles?

We have so many great memories. But if we had to pick, we would pick two. First, the afternoon we spent in Venice Beach was amazing! The nature in California is so diverse and merges with urban life in a beautiful way. But the memory that feels close to our heart was the night out at the State Social House right after the closing dinner of the program. Having everybody gather and celebrate before saying goodbye was the perfect way to internally immortalize the experience.

What’s one thing you learned in the Directing workshop that we can see incorporated into the scene you filmed?

What we can see incorporated in our scene are definitely the artistic choices we made. Being able at some point to own our choices in the face of obstacles and have our crew trust us was absolutely pivotal. It wasn’t about being safe, but following your instincts. So whether it’s things that worked or didn’t, when we watch our scene, that’s the main lesson that remains. And we’re grateful for that!

What did you learn from your Mentor, Jeremy Podeswa?

One of the most important things we learned from Jeremy, among many, was without a doubt how to totally own our angle. When he encouraged us to do this in the beginning we have to admit, we didn’t quiet understand what it really meant. But we got to be more aware of what we brought to the table and how valuable it was to keep the story personal. It’s like we woke up to what it truly meant to be women telling the stories that we tell, how it was okay to challenge a male-dominated mindset in the filmmaking landscape. His support and the confidence it brought us made us experiment creatively as filmmakers and felt like an initiation to a new understanding of our story.