For nearly two decades, Los Angeles native Clea DuVall has been proving her range as a versatile actor and performer, finding success in both mainstream Hollywood fare (including key roles in HBO’s acclaimed Carnivále and the Academy Award-winning Argo) and independent film. The openly gay DuVall has also managed to bridge the gap between these two sides of the industry while confidently avoiding stereotypes, taking on roles both gay and straight without being typecast. Now DuVall is taking her talent behind the camera: writing, directing, producing and starring in her first feature, The Intervention.

The Intervention reunites DuVall with her But I’m a Cheerleader costar (and current Orange is the New Black cast member) Natasha Lyonne. The pair star as one of four couples who get together for a holiday retreat that—surprise!—has a hidden agenda. Over one long, uncomfortable weekend, the group gathers to confront one of the unsuspecting couples, whose rocky marriage has inevitably caused their friends to intervene to try and convince them that a divorce would really be the best thing for them both.

The multitalented DuVall took some time to chat with us about what inspired the screenplay, the challenges of directing yourself and why normalizing LGBT characters in film is so important. Here’s the conversation: 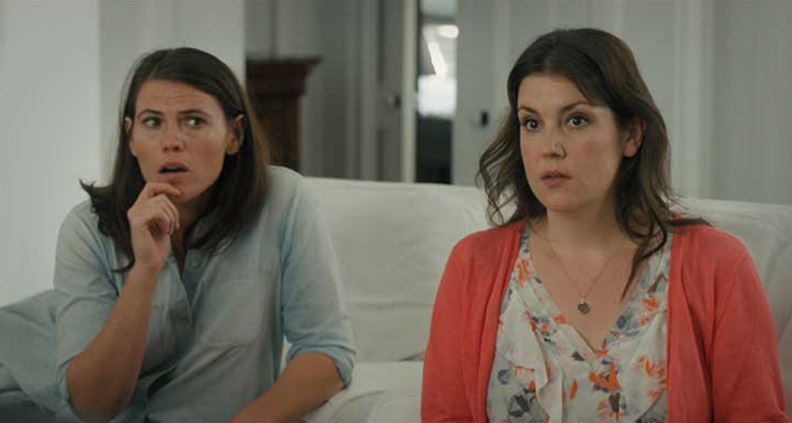 So what inspired this story?

There was a period where I was spending a lot of time involved in other people’s lives and relationships. I wasn’t focusing on myself enough. I had this lightning bolt of self-awareness where I realized I had been putting off a lot of my own goals and work that I needed to do. When I took to writing, this manifested from that time and those experiences.

Was it a challenge to wear so many hats on this production: director, writer, actor… ?

…executive producer! Craft services! [laughs] I wanted to be hands-on and involved in all aspects of production. But I had the most amazing crew, and couldn’t have done it without them. Everything happened really fast so there wasn’t much opportunity for worry about anything. The film got funded quickly and we shot it in 18 days, so everything was dealt with in a very time sensitive manner. One thing that was definitely challenging was we decided not to have playback to save time and money. So in directing myself, it’s not like I could watch [what I was doing] afterwards—[I was] just going off of reactions.

Now that you’ve made your first film, what’s one thing you’d like to do differently on the next one?

Not cast myself. It was so thrilling to be able to direct, and in the scenes that I wasn’t in it was such a relief to give my total focus to the other actors and not have to monitor my performance as well. The days where I could just be a director were my favorite days on set.

In creating the relationship between your character, Jessie, and Natasha’s character, did you feel you had an obligation to break stereotypes and bring a fresh perspective to depicting LGBT relationships?

When I started writing the script and this character for myself I knew that Jessie would be gay, to represent my experience. I definitely wanted to have a gay couple in a movie where it’s not about them being gay and to normalize [the characters] for audiences. Because being gay is normal. Gay people are friends with straight people, and I wanted audiences to see couples who are all in relationships, all have their issues, are all friends. And the one couple just happens to be a gay couple.

Do you think we’ve made progress with the representation of the LGBT community in the media?

I do think we’ve made progress, and certainly come a long way from when I first started working. We still have a long way to go, but it’s improving.

Last question. What’s one piece of advice you’d give to any aspiring screenwriters, filmmakers or actors?

No matter what stage of the process you’re in, reach out to the people who have had your experience. Because it can be lonely. It can be midnight and you’re just tossing and turning and feel so alone, thinking no one will understand. Communicate. Reach out to your peers and colleagues. 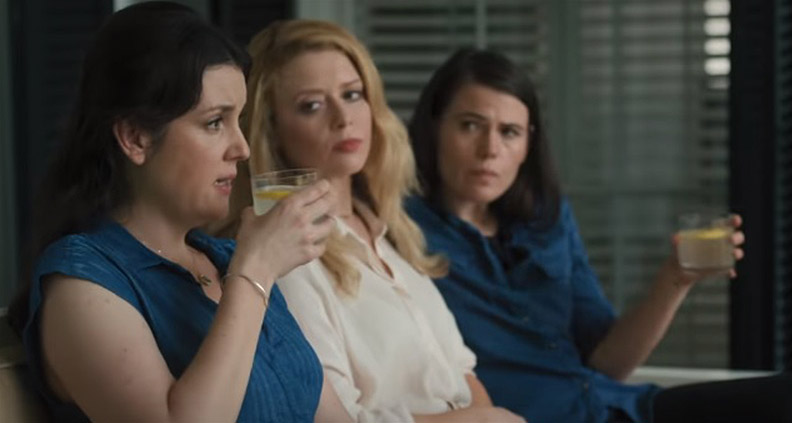 In addition to DuVall and Lyonne, The Intervention boasts an ensemble of wonderfully talented young actors, including Alia Shawkat, Jason Ritter, Ben Schwartz, Cobie Smulders, and Vincent Piazza—as well as one particular scene-stealer who just so happens to be DuVall’s real life best friend: Melanie Lynskey, who won a Special Jury Prize at Sundance for her performance as Annie, an emotionally detached member of the group with no filter (and who just to happens gets to deliver the script’s most hilarious lines). Since the film’s festival premiere in January, buzz has been building around the role, with critics raving about Lynskey’s performance as one of the year’s best.

“Melanie is so great in this movie,” says DuVall, clearly proud of her colleague. But even though the performance is shaping up to garner Lynskey some long overdue attention this upcoming awards season, the actor maintains she doesn’t even think about that sort of thing. In a separate conversation, Lynskey spoke to us about the film, her acting process and why she was so nervous having Clea direct her.

What drew you to this role and what do you look for in any character you sign on to portray?

Well, I knew Clea was writing a role for me so I pretty much had no choice in taking it on! [laughs] I just thought, “Oh please let it be good,” and I was so happy after reading it for the first time. There’s something instinctive that comes over me [when I read a script]. Typically, I can just feel [if the role is right] because I start intellectualizing, “How does this person talk? How do they operate?” I feel it in my soul if the role is right and it happened deeply when reading [The Intervention].

Do you have any on set rituals to help you get into the required emotional space?

Music, definitely, is something I always use. As an actor you often have to be left alone for a minute to get yourself in the right emotional space. So for me, music does that. However, in playing Annie I didn’t really have to do that because she was so out of touch with her emotions. I got to just exist as her, instead of having to put myself in the right state of mind because she was so detached.

There is a lot of buzz surrounding your performance and you already won the Special Jury prize at Sundance. Do you think about the upcoming awards season at all?

Oh, gosh. No. I’m so realistic. I’ve been doing this for so long now. I think if I put that sort of pressure on myself I would just be constantly disappointed. The recognition is a nice thought, but I’d much rather a film get nominated than [get a nomination for] myself.

What was the biggest challenge you faced making this film?

Clea is my best friend, so it was definitely a little weird being directed by her. I was concerned before we started shooting and even went to therapy to prepare myself mentally for this process. I didn’t want anything to happen to our friendship and a big challenge was being able to stick up for myself and my perspective in regard to the script and this character. But I also wanted to make sure her [DuVall’s] voice and vision wasn’t compromised. Everything was smooth, but it was a little challenging, and it made me nervous when we were doing first edits to the script together.

Any plans to take a cue from Clea and write or direct yourself?

No, I don’t… I think that would be way too overwhelming.

You’re the only person who is you. When I first started going on auditions I was always comparing myself to everybody else in the room—if I were only skinnier, or if I were only prettier. Finally I got into the mindset of, “I’m the only one who’s me. If they want me, that’s wonderful.” Stop trying to embody others and celebrate that you have a very specific skill set that no one else walking into the room has.

The Intervention opens in theaters and on VOD starting this Friday, August 26th. For more information, please visit the film’s Facebook page.

Detail Oriented: Imagining a New Old West with the ‘Buster...

What You’re Looking At: ‘First Girl I Loved’ Filmmakers...