The film, which premiered at Sundance in January, is the product of a long and involved development process, one that saw Ahn taking project through the Sundance Screenwriters Lab as well as the Film Independent Directing and Screenwriting Labs. Spa Night also received Film Independent’s FilmLA grant for films shooting in Los Angeles, and the EFILM | Company 3 feature film grant to cover costs associated with post-production.

Filmed on location in Koreatown, Spa Night is a sensual and atmospheric exploration of the uneasy intersection between sex, cultural identity and family, with the traditional Korean spa acting as the meeting point between David’s staid past and his uncertain future. The film opens this Friday, August 15 in theaters. Don’t miss it!

We recent spoke with Ahn about Spa Night’s autobiographical roots, the casting process and how the film’s queer themes overlap with more traditional stories about second-generation immigrant families. This is the conversation: 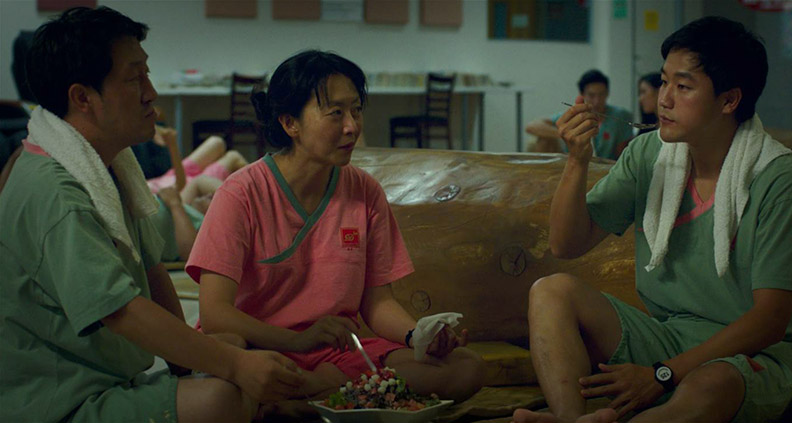 What compelled you to make a film set in the world of underground gay hookups amid the spas of LA’s Koreatown?

There are a few things that really inspired the film. A friend of mine told me he had a hot hookup with a guy in the steam room of a Korean spa, and hearing that story really shocked me because the spa has always been a place I went with my family. The spa is a very traditional Korean family activity, and to hear that it was being used by the gay community [in that way] was kind of sacrilegious—but also really sexy. I had made a previous film called Dol (First Birthday) and [that was] a very chaste film. It follows a man who has a partner, there’s not really a sexual element to it as much as there’s this element of being a family. So I was trying to figure out what my next film was going to be. I wanted to talk about what makes me gay—which is that I desire to have sex with men. I really wanted to get at that topic, because that’s what starts this whole identity.

That ties into my next question. How does the queer aspect of Spa Night relate to the story of a second-generation Korean-American immigrant family?

I think that what the queer theme does for the story is add this layer of potential family drama. I feel like many children of immigrants want to succeed for their parents. And that often means being able to find a good job, get married, buy a house and have kids. Being queer does change that—you suddenly have a different future than the one’s that’s expected for you. So this question of success and making your parents happy comes into question, and it feels much harder to achieve.

How much is what we see of that in Spa Night autobiographical?

In many ways it’s very autobiographical. I think it’s why, even though I’m making these queer films, I want to find a lot of success with them because I have to justify to my patents that I made this movie. Like, if I’m going to make a queer film then at least I have to make sure it gets into Sundance! [laughs] It’s always trying to prove a certain level of success and achievement. [But] in many ways, the character of David is very different than me. He isn’t in college. He struggles academically. He’s an only child. I was a very good student. I went to Brown University and I have an older brother. But emotionally I feel very in line with that character. 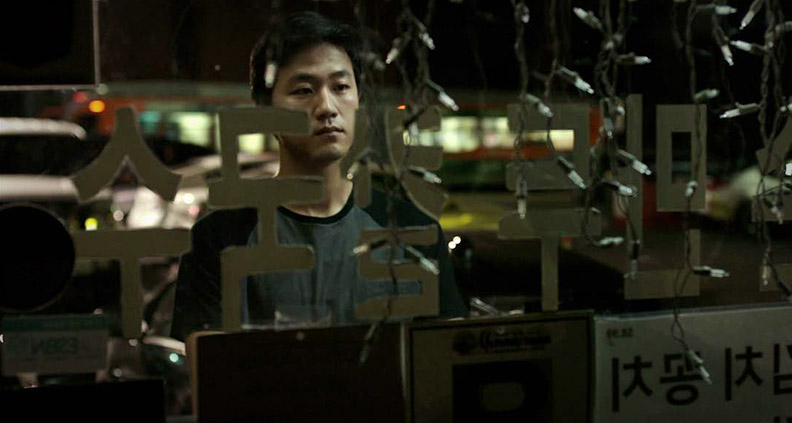 What do you find intriguing about Koreatown? Do you have any favorite Koreatown movies?

[Koreatown] was a community I grew up in and am very familiar with. I wanted to make this film in a way that people could really sink into the space and really understand how much of a community it is. You know, thinking about other movies off the top of my head I can’t really think of any that influenced me. I remember, maybe I was in high school or maybe even before that, there was this movie Collateral with Tom Cruise and Jamie Foxx. That has a kind of fun Koreatown club sequence. But yeah, it’s definitely an underutilized, underrepresented part of LA in film.

Joe Seo won the Special Jury prize for lead actor in the U.S. Dramatic category at Sundance. What was the process of casting him like?

We were looking for an actor for the part of David for over a year. We actually started the search when I did the Film Independent Directing Lab because we wanted to shoot some scenes from the script and we needed a David. So we went through all the popular casting websites and did auditions. We then hired a casting director, Julia Kim, who had cast Sean Baker’s film Starlet and Cam Archer’s films. So we went a more traditional route. We also did some street casting. We went to the gay Asian night in West Hollywood called “Game Boy” [laughs] and talked to people there. We found Joe at our second-to-last audition. He had self-submitted—he saw the casting notice on LA Casting and put in name in. We’re really fortunate that we decided to keep looking. Joe had just come back from Korea where he’d been living for a number of years trying to make it as an actor there. And he came back to LA a few months before our casting. As soon as he walked in I felt this could be the guy.

You touched on this a little bit, but you participated in both the Film Independent Directing and Screenwriting Labs. How did those two experiences impact your approach to Spa Night?

With the Film Independent Screenwriting Lab, I think the biggest piece of advice I got was from my mentor Robin Swicord, who wrote Memoirs of a Geisha. I told her I was afraid to make this movie and she told me I can’t be, I have to do it. That really motivated me to push and fight for what I wanted. And the Directing Lab, it’s such a gift to be able to practice your shoot. I shot this sequence in the script set in a karaoke, and it wasn’t until after I shot and edited that scene that I really understood what that scene was about. That helped me when I had to shoot it for real because I could kind of streamline the shot list and really emphasize the performance beats that I wanted, it really gave me a lot of clarity. But Film Independent has been really helpful in other ways with Spa Night. We received the Film Independent Film LA grant and we also received the Film Independent EFILM | Company 3 Grant for our color correction, so we really couldn’t have made the film without Film Independent’s help.